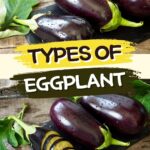 Eggplants are versatile, nutritional vegetables you can add to almost any dish. But did you know that there are different types of eggplant?

There’s the tiny fairy tale eggplant, which can be grilled or roasted and used as an appetizer.

Then, there are the larger, more widely available varieties found at most supermarkets.

These include the globe (or American) eggplant and Chinese eggplant.

There are even white and green eggplants if purple isn’t your color!

In this post, I’ll explore the different types of eggplant out there. I’ll even discuss some tasty ways to prepare them.

Keep reading to learn about all things eggplant!

The American eggplant is probably the most widely recognized eggplant variety. At least in the United States.

In other words, it’s the ‘typical eggplant’ variety.

Grocery stores all over America and the UK sell this large, tasty eggplant. Farmers all across the US grow it in their gardens, too.

It’s a great choice for signature dishes like eggplant parmesan and fried eggplant.

You can roast, grill, fry, bake, or even saute them. They make a terrific side dish or main course.

Fairy tale eggplants are small and have vibrant white stripes on their purple skins.

They look like the eggplants kids would serve to their dolls or in their miniature kitchens.

Fortunately, what they lack in size, they make up for in taste and tenderness. They’re mild and sweet.

And their tender flesh and few seeds make them perfect for grilling.

They cook quickly, no matter how you decide to cook them.

Besides grilling, slow roasting them is another good option. Top them with lemon juice and herbs and roast them in the oven.

Because of their small size (they’re no longer than a few inches), they make excellent appetizers.

They also make good side dishes but aren’t large enough for the main course.

Italian eggplants have similar shapes to American eggplants. They also have a deep, rich purple color that borders on black.

However, they’re somewhat smaller than American eggplants. They have a sweeter flavor and tenderer flesh.

They’re likely the eggplant you’ll enjoy if you have eggplant parm from an authentic Italian joint.

You can use it in non-Italian dishes, too, of course. Any way you can cook an American eggplant, you can also cook an Italian eggplant.

However, they are actually two distinct eggplant varieties. Let’s talk about the Japanese one first.

The two look similar, but Japanese eggplants are a darker purple and often shorter.

Both are slim and long rather than short and globular.

The Japanese eggplant is tender and creamy. It does well when grilled or baked.

However, you can also use it in stir-fries with phenomenal results.

Because they’re so thin, you can cook them quickly.

Of course, that also means they’re easier to burn than some of their thicker counterparts. Watch them closely to prevent that.

On the other hand, the Chinese eggplant is typically longer and lighter in color.

Most people describe them as “lilac” or “lavender” colored. They’re also sometimes tinged with white.

Most people think of Italy when picturing eggplants. However, Chinese eggplants are more widely produced.

After all, China produces more than half of all the world’s eggplants.

Like their Japanese cousins, Chinese eggplants are also thin, tender, and mildly sweet.

They’re perfect for grilling, braising, or using in stir-fry dishes.

In appearance, the graffiti eggplant is easily my favorite eggplant type.

It’s shaped like a teardrop and features a bright green top and purple and white-striped skin. It’s stunning.

It’s also delicious. Like the American eggplant, you can cook it any way you dream up.

It has tender skin, few seeds, and creamy flesh. All of that makes it especially perfect for grilling.

They always turn out fantastic either way.

You can also puree them with excellent results.

Keep in mind that some people call these eggplants by different names.

If you hear someone talking about Sicilian or zebra eggplant, this is the eggplant they mean.

Finding a Thai eggplant in America is challenging. And even if you’ve seen one, you might not have known what it was.

These eggplants are about the size of figs and deep green. In other words, they look nothing like eggplants at all.

They also have several bitter seeds you should remove before eating them.

As for eating them, plenty of people do so without cooking them first.

They’re a great addition to salads and veggie platters. They’re crunchy and have a distinct but hard-to-describe taste.

You can also saute or puree them. If you’re a fan of Thai food, try adding them to your favorite recipes. You won’t be disappointed.

Filipino eggplants, like Japanese and Chinese eggplants, are long and thin.

However, they get a little thicker in the middle than the other two Asian eggplant varieties.

They also differ in color. Filipino eggplants are a dusty shade of purple, not light and not bright. In fact, their color often borders on gray.

In their native country, people call them the talong or taeong.

They often use them in Filipino recipes, such as Filipino eggplant adobo.

There’s another variety of Filipino eggplant. It features the same color but a different shape.

It’s smaller and rounder, but it’s also harder to find.

There are several white eggplant varieties. Still, my favorite is the one that looks like an oversized egg.

It’s large, round, and creamy white. Its flavor is sweeter and milder than purple eggplants.

Even so, you can cook them or use them in any recipe for eggplant.

Other than the milder taste, most people would never even notice a difference.

They hold the batter well and crisp up nicely. You can also roast, grill, braise, or saute them.

The Rosa Bianca eggplant is a bit of a mystery.

Some people lump it in with Italian eggplants, while others insist it’s a Sicilian variety.

Whatever the case, it’s a wonderful eggplant with which to cook. It features a fat, round shape and a lavender and white color.

However, its tenderness and sweet flavor make it ideal for grilling. It doesn’t even need much seasoning.

Just brush a little oil over it and toss it on the grill. Its natural flavor is tasty enough.

Try these different types of eggplant for healthy meals! From American to fairy tale to Japanese, each one is equally as delicious.