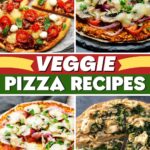 If you’re vegetarian or trying to get more plants into your diet, you’ll be happy to know you can make any number of delicious veggie pizza recipes using an array of vibrant and fresh ingredients.

And no, I don’t just mean cheese and tomato!

Have you ever tried BBQ jackfruit on a pizza with peppery red onions? Or what about shredded and crispy Brussels sprouts with tangy balsamic onions?

Trust me when I say you don’t need pepperoni to make an incredible pizza.

The biggest issue most people have with vegan pizza is the lack of cheese. After all, what’s pizza without that gooey and salty cheese pull?

Full disclosure: you won’t get that stringy, melt-in-your-mouth texture from vegan cheese.

But what you will get is a creamy and cheesy taste that’s surprisingly satisfying.

BBQ jackfruit is one of those vegan recipes you’ll have to try to believe.

Is it exactly like shredded pork? No, it has a much softer texture and slightly sweet taste.

But it’s close enough that most people probably won’t notice, especially when it’s on a pizza with sweet pineapple and spicy jalapeños.

If you’re not a fan of vegan cheese, you can still have a super tasty pizza without it. It’s all about the toppings!

This recipe keeps it simple with peppers, onions, and mushrooms, but you could add anything from truffles and corn to chilies and roasted sweet potato.

And just in case you miss that cheesy taste, all you need is a sprinkling of nutritional yeast and cashew parmesan!

This veggie pizza recipe is so colorful, even the kids will be reaching for a second slice.

But it’s not just bright, as it’s also packed with fantastic taste and texture.

You’ll use buttery and slightly tangy artichoke hearts, along with crunchy peppers and crisp red onions.

I think cherry tomatoes work best for this as they’re a little sweeter, but you could use any you have on hand.

During the summer, I always stock up on tomatoes from the farmer’s market. You know the ones I mean, with all the incredible colors?

Now, picture those sliced on a pizza.

Again, any tomatoes will taste great, but if you want that wow factor, try to find a selection to make it stand out.

Even if you don’t particularly like Brussels sprouts, please give this recipe a shot! I think you’ll be pleasantly surprised at how addictive it actually is.

I use a mandolin to get nice thin slices of sprouts, which will crisp up in the oven.

You can also use a knife and have slightly bigger chunks. It’s totally up to you.

Since the balsamic onions are pretty strong, you won’t need to go overboard. Just a light layer under the sprouts will be more than enough.

Pizza dough is relatively easy to make at home, and I love that you won’t need to try too hard to mold it. In fact, it looks better when it’s rustic.

This whole wheat dough is just as easy as a standard pizza dough recipe, and it’s slightly better for you than processed white flour.

So, since you’re getting some added nutrients from the dough, you can go crazy with the toppings!

Is there a better appetizer than hot and cheesy spinach and artichoke dip with crunchy chips and warm bread?

I don’t think so.

These would work really well at your next party in minis or as a flatbread cut into strips.

That way, people can have the yummy dip and still mingle without making a mess.

Tomato and cheese is such a classic combination, but if you want to jazz it up, look no further than spinach and feta.

In truth, you won’t even taste the spinach. It’s more there for pops of lovely green over the light base.

But that little bit of feta goes a long way, adding a delightful salty and creamy finish.

Like spinach in the dish above, I just love the vibrant green color in this veggie pizza recipe. Of course, this time, you’ll get that from the broccoli and kale.

Fresh broccoli will work best here, as frozen will likely make the dough soggy. Also, be sure to chop it relatively small, so it’s easier to eat.

With a name like ‘herb garden,’ you have to expect lots of greenery in this dish!

But that doesn’t mean this is any less scrumptious than the other pizzas on this list.

If anything, I think the added pesto makes this extra addictive.

There are certain flavors you come to expect in Mediterranean cooking, and this pizza delivers in spades.

Between the creamy feta, tangy olives, and bright red peppers, you might never go back to greasy takeout again.

Earthy, meaty mushrooms and sweet caramelized onions pair surprisingly well together. Add some garlic and salty cheese, and you’ll have one tasty pizza.

I like regular button mushrooms, but you can pick any you want. That said, keep in mind they will shrink as they cook, so don’t cut them too small.

Who doesn’t love garlic mushrooms? I could eat a whole pan full!

I also adore stuffed mushrooms with spinach and cream cheese, which is kind of what the topping for this pizza is.

Since it’s vegan, you’ll use dairy-free cream cheese for the base, onto which you’ll add garlicky mushrooms and fresh spinach.

The pine nuts at the end offer a lovely crunch, but if you want to save some money, just scatter over some panko breadcrumbs instead.

Caprese salad is a delightful combination of fresh tomatoes and mozzarella with olive oil, salt, and sometimes balsamic glaze.

Since it’s often served with crunchy bread, it only makes sense that you can put it all onto a pizza, right?

I have to admit that I was hesitant to try this because of the cooked hummus. But it came out so well, especially with the grilled veggies on top.

Plus, this opens up a bunch of different flavors. I used roasted red pepper hummus, but you could use any you like.

Pizza Margherita is one of the most traditional recipes around, using just tomato sauce, cheese, olive oil, and basil.

To that end, I highly recommend making your own pizza dough or buying some from your local pizzeria.

Since it’s one of the key elements, it’s worth the extra steps.

Fontina is a type of cheese that’s lightly sweet, buttery, and even a bit nutty. It’s pretty strong, which I think you’ll need when adding earthy mushrooms.

You’ll also notice fig jam on the ingredient list, which may seem odd at first.

But if you’ve ever enjoyed a cheese board with sweet and savory treats, you’ll know this is a winning combo!

I had to include one out-of-the-box recipe on this list for those looking to avoid carbs and gluten.

Though there are carbs in sweet potatoes, they’re not as heavy or difficult to digest as pizza dough can be.

And although these obviously won’t taste like standard pizza, they make a terrific snack.

Not to mention, you can use them to “trick” the kids into eating their veggies!

Mexican pizzas are generally lighter since they use tortillas instead of heavy pizza dough.

But one of the main differences is in how they’re cooked.

Rather than assembling the pizza and baking, you’ll only bake the tortillas and add the ingredients once they’re hot and crispy.

Try these veggie pizza recipes for an easy, healthy, delicious meal the family will love! From tomato to Brussels sprouts to spinach artichoke, there are so many tasty veggie combos for pizza.