From juicy dumplings and pillowy buns to savory skewers and sweet snacks, these scrumptious Chinese street foods are truly something special.

They’re pretty unique, and some will take a bit of practice to get right. But they’re more than worth it in the end!

If you’re searching for a fun culinary adventure, look no further than Chinese street foods!

China is home to some of the most amazing food out there. I’m talking duck feet, dumplings, and deep-fried tarantulas!

But don’t worry, there’s no creepy crawlies here – just delicious recipes for some of the most popular street foods in China.

20 Best Street Foods in China You Have to Try

Made from an egg batter that’s spread thinly, they’re a lot like French crepes but with a Chinese twist.

They’re then rolled up into a wrap and topped with delicious sauces, like hoisin.

This satisfying snack can be found across many towns in China, but it’s easy to replicate at home.

Chinese tea eggs are a delicious and unique egg dish commonly served in the Sichuan province of China.

To make them, you’ll marinate eggs in a broth of tea, soy sauce, sugar, and Sichuan peppercorns.

They need to sit for at least 12 hours, allowing them to absorb the rich flavors of the ingredients. And the resulting eggs are complex, nutty, and savory.

Want to save this blog post? Enter your email below and we'll send the article straight to your inbox!
Go to Recipe

Featuring a thin and crispy pastry filled with flavorful meats and vegetables, it’s a satisfying savory snack any time of day.

Tasty hot and cold, xian bing often comes with various sauces and seasonings. Plus, it can be any kind of meat, including chicken and pork.

Whether eaten as part of a meal or on its own, xian bing is definitely delightful.

Jiaozi (Chinese dumplings) are savory snacks/sides made with a thin pastry wrapping filled with scrumptious meats and veggies.

The most popular fillings include pork and cabbage, shrimp, and beef. They can be boiled, steamed, fried, or served in soup.

Eating jiaozi is an important part of the Chinese tradition, especially during festivals such as Chinese New Year.

Of course, you’re also free to enjoy them whenever a craving strikes. And this easy recipe will show you how.

Baozi are Chinese steamed buns. And they aren’t just immensely popular in China, but in many parts of the world, as well.

Between the soft, pillowy white dough and scrumptious meaty filling, it’s not hard to see why.

You can fill baozi with a variety of ingredients. But for this recipe, you’ll use minced pork and a savory broth.

Oh, and don’t be surprised to see steamed buns with sweet fillings like red bean paste.

Tánghúlu (candied haws) are a traditional treat in China enjoyed as a snack at any time of the day.

Made by simmering wild Chinese hawthorn fruit in simple syrup, the resulting berries have a heavenly sweet, soft, and chewy texture.

You’ll see them skewered as is or sometimes covered with sesame seeds for a nice crunch. Either way, they’re super tasty.

Many believe that tánghúlu offers a myriad of health benefits, such as aiding in digestion, reducing blood pressure, improving immunity, and more.

So they’re definitely worth trying!

Grilled fresh squid is a Chinese street food that’s made a mark on both East and Southeast Asian cuisines.

It’s known for its unique aroma that comes from grilling the freshly caught squid over an open flame.

The squid can be cooked with a variety of seasonings, ranging from butte and garlic sauce to Chinese five-spice mix.

La zi ji, or Sichuan mala chicken, is a popular Chinese snack from the Sichuan Province of China.

It’s essentially marinated chicken fried and mixed with lots of chillis and aromatics.

And between the chili peppers and Sichuan peppercorns, it’s no wonder the name “mala” is derived from the numbing sensation you get from eating spicy foods.

But despite all that spice, it’s still wonderfully balanced with a delightful blend of flavors and textures.

Chuan’r is China’s answer to kabobs.

Featuring small cubes of juicy lamb marinated in spices and cooked over an open flame, they’re the ideal street food for busy commuters.

The smokiness from the grill with the flavorful marinade makes each bite a pleasure.

Chuan’r is also known for being less greasy than other types of Chinese street food while still maintaining its great taste.

Chou Doufu may not have the best name, but it’s a must-try for tofu lovers.

“Stinky tofu” features fermented tofu cubes that have a powerful odor from the brine it sits in.

It can also be preserved in ingredients with even stronger odors, such as fermented milk or shrimp.

The pickling process gives the tofu its distinct pungent smell – one of its most recognizable features.

Despite its odor, Chou Doufu is incredibly popular due to its unique flavors and textures.

It’s often served with rice at street stalls or used as an ingredient for stir-fries and hot pots.

While people unfamiliar with it might be deterred by its strong scent, for locals, the more it smells, the better it is!

Roasted sweet potatoes are yet another Chinese street food fave, which I think you’ll make again and again.

This sweet snack is made by slowly roasting chunks of sweet potato until the outside becomes crispy and golden brown.

Once done, they’re tossed in a light coating of sugar or cinnamon for extra flavor.

They are extremely popular as an afternoon snack or even as a light meal.

As simple as they are, roasted sweet potatoes make for a surprisingly addictive treat.

The dough is shaped into small balls and then either boiled or steamed until soft and chewy.

You’ll see them served in sweet soups or filled with sweet ingredients like black sesame seed or sweet peanut paste.

Tang yuan are popularly believed to bring happiness and abundance. And they symbolize family unity during festivals and celebrations.

Chicken feet may not be the most appetizing dish for some, but they’re a popular and exotic street food in China and Southeast Asia.

The texture is similar to that of turkey necks or giblets. And when they’re cooked low and slow in sauce, they’re incredibly flavorful.

Rou jia mo is an iconic and beloved Chinese street food, and it might just be my favorite!

This sandwich is made by stuffing stewed, shredded pork into a freshly-baked sweet white bread pocket.

The bread soaks up all of the delicious flavors from the spices, creating a unique taste sensation.

Rou jia mo is often enjoyed with a hot cup of tea for an afternoon snack. But it’s great for dinner too!

Noodles are a super popular street food all over Asia.

You’ll see massive woks on street corners with huge piles of juicy, slurpable noodles at all hours of the day and night.

And these Chinese white noodles tossed in a glorious soy and scallion sauce and so good, you should bring them home.

With ingredients like garlic, soy sauce, and sugar, this dish will make your taste buds sing.

Zongzi are sticky rice dumplings with a meat filling. Think of them like Chinese-style tamales.

They’re made with glutinous rice, meat, and veggies, all wrapped up in bamboo leaves.

The combination of flavors, textures, and aromas is sure to please even the pickiest palate!

A symbol of strength and fertility, these dumplings are often served during Chinese holidays. But they can be enjoyed all year round!

Guoti are a type of potsticker from Northern China that have found their way into the cuisines of many Asian countries.

From the dumpling-shaped wraps to the delicious fillings of ground meat, shrimp, vegetables, and more, they’re guaranteed to please.

Most often fried, they have a delightfully crisp bottom and are best with a yummy dipping sauce.

Shaobing is a flatbread with a slightly sweet and nutty flavor.

You’ll mix the ingredients, form the dough into disks, then bake until crisp.

The resulting bread is crunchy on the outside and chewy inside, with an aroma that’s impossible to resist!

Made with glutinous rice and fillings that include pickled vegetables, dried shrimp, and pork floss, fan tuan are such a fun Taiwanese breakfast food.

And thanks to the burrito-like shape, they’re perfect for eating on the go.

This beloved rice stir-fry originated in China but has since been adapted across different cultures and countries.

After all, who doesn’t love fried rice?

From juicy dumplings and pillowy buns to savory skewers and sweet snacks, these scrumptious Chinese street foods are truly something special. 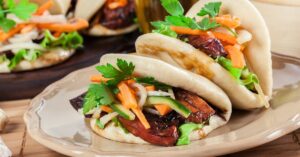 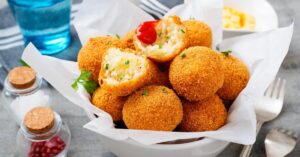