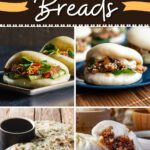 From stuffed steamed buns to crispy scallion pancakes, these comforting Chinese breads have been a beloved part of Chinese cuisine for centuries.

One bite, and you’ll see why!

There’s nothing like dipping freshly fried dough into a bowl of seasoned soy sauce. Or tearing off a big piece of soft sesame-studded mantou.

And if you’ve never tried pork and veggie stuffed gua bao, you’re in for a real treat.

These different types of traditional Chinese breads are to die for. Some are sweet, others are savory, but one thing’s for sure – they’re all incredible.

Bread varieties are just as numerous and varied in China as they are anywhere else in the world.

But unfortunately, I don’t have time to talk about all of them.

Instead, I’ve chosen the ten most popular Chinese breads to discuss. You’ll probably know many of them, even if you don’t recognize their names.

After all, steamed buns and scallion pancakes are pretty famous, even outside of China! But I think there’s a few here that’ll be new to you.

Anyone who’s ever visited China can tell you they don’t eat many sweet foods. Dessert isn’t typical, and even snack foods are rarely sweet.

Instead, they’re savory, crunchy, and not too unhealthy. Shao bing, or sesame flatbread, is a fantastic example of that.

Typically eaten for breakfast or as a snack, shao bing is delicious. It’s a layered flatbread often covered in sesame seeds, green onions, and more.

Each layer features scrumptious sesame paste, and the texture is super crunchy and impossible to resist.

Steamed buns are one of the most common sights in Chinese restaurants. (That’s true for restaurants in China and America.)

Popular in Chinese homes, too, they’re large, round yeast buns but aren’t light and airy like the type of dinner rolls we’re used to.

In China’s southern provinces, people often make them sweeter, and you can eat them alone or with a meal.

Some people even cut them open and stuff other things inside.

Speaking of…baozi are steamed buns that have been stuffed.

They’re very similar to the mantou above. However, they typically feature a meat or veggie filling.

Some people erroneously refer to these as dumplings.

And while they are pretty similar, dumpling dough doesn’t usually include yeast. Dumplings are also shaped differently.

Stuffed steamed buns are a popular meal in Chinese culture, and families often prepare them together by hand.

You’ll also often see them pop up in Chinese anime and manga.

You won’t often find youtiao in American Chinese restaurants. However, these fried dough sticks are incredibly popular in China.

They have several names, including fried dough, Chinese churros, or Chinese doughnuts. I’ve even heard them called Chinese bread sticks once or twice.

Despite the images conjured by words like churros and doughnuts, youtiao aren’t sweet. Instead, they’re deep-fried and slightly salty.

When I visited China, we had them nearly every day for breakfast.

In most Chinese homes, they’re a popular accompaniment to soy milk or porridge.

They look and feel like typical baozi, but the filling is much sweeter than the usual veggies or pork.

If you want something a bit more Americanized, try fusion gua bao.

Yes, they’re steamed yeast buns. But they’re served more like tacos, with a tasty filling almost sandwiched in the middle.

You can put whatever you like between them, though the most common choices include a mixture of meat, peanuts, and greens.

You could use them for anything, though, including a typical ham sandwich.

Also known as the Chinese pork burger, it’s a common street food in Xi’an. It’s similar to a pork BBQ sandwich, but the bun is different.

Thick and dense, it’s almost like a steamed yeast bun. However, it’s not as fluffy or chewy.

China isn’t and probably never will be well-known for its pizza. Even so, Yunnan ‘pizza’ (aka, baba) is quite good.

The ingredients differ depending on where you purchase them.

For example, the southern regions make it from glutinous rice flour, whereas northerners prefer wheat flour.

There are savory and sweet varieties that feature lard with herbs and spices and rose jam and brown sugar, respectively.

No matter which you get, you’re sure to enjoy it.

Mandarin rolls are another form of steamed yeast buns. However, they have a distinct, mummy-like appearance that sets them apart.

Their taste and texture are very similar to mantou. People even eat them in the same ways – with condensed milk or loaded with warm, savory fillings.

Sometimes called flower rolls, they’re almost impossible to describe correctly. You have to see them to get the full effect.

I don’t usually save the best for last, but I did this time.

I love scallion pancakes or cong you bing. They’re hard to describe but taste incredible.

They can look like cheeseless pizzas or thin quesadillas, depending on how you make them. They’re crisp, savory, and full of earthy, oniony flavor.

They are a type of pan-fried flatbread and are insanely good. Other ingredients often added include peppers, spices, herbs, and sesame seeds.

Most people eat them by themselves or dipped in soy sauce.

There is something undeniably special about Chinese breads and buns. From stuffed steamed buns to light scallion pancakes, you’ll want to try them all! 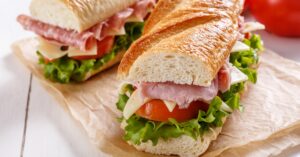 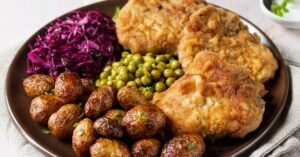