Elevate your cooking expertise with this list of lobster mushroom recipes.

If you long for the taste of lobster but are on a plant-based diet, you’ll fall in love with the lobster mushroom.

Not only do these shrooms look like pieces of lobster meat, but they also have a similar seafood flavor.

Since you have to forage lobster mushrooms, they can be quite expensive.

But once you have a taste of the famed shroom, you’ll want to cook with it all the time.

If you’re intrigued, read on! One of these lobster mushroom recipes might just become your new favorite.

Keep this recipe in your back pocket next time you need an impressive meal to make on game day.

You’ll love how the lobster mushrooms mix with the avocado, cilantro lime rice, and fresh mangos.

Vegans and non-vegans alike will fall in love with each flavorful bite.

Don’t forget to dollop vegan sour cream on top for one magnificent mouthful.

Just because you follow a plant-based diet doesn’t mean you can’t enjoy a piping-hot bowl of lobster bisque.

By swapping in lobster mushrooms for the salty crustaceans you can achieve a buttery, umami-rich bisque loaded with flavor.

You won’t believe how incredibly simple it is to make this soup.

You create simple ingredients like lobster mushroom oil, vegan roux, and a broth, then combine everything at the end.

Trust me, you’ll want to keep this soup recipe in your back pocket for a blustery, winter day.

Are you craving a little taste of the east coast? Give this lobster roll recipe a shot.

You’ll love the creamy, savory flavors in every mouthful.

If you’ve ever tried making regular lobster rolls, you know how easy they are to prepare.

However, since you’re using mushrooms in lieu of mushrooms, you have to spend a little extra time on the fungi.

Still, you can have this meal ready on the table in under an hour, making it perfect for weekend dinners when you want to indulge.

Give this lobster mushroom rolls recipe a try. I guarantee you won’t regret it.

If you want to whip up a gourmet meal in under half an hour, this recipe’s going to rock your world.

You won’t believe how much buttery richness is infused in the lobster mushrooms.

After sauteeing your shrooms in a mixture of butter, olive oil, and garlic, you’ll be impressed by how much flavor each fungus soaks up.

This recipe tastes like your favorite lobster Alfredo pasta, except it’s vegetarian. So you can cut down on meat without sacrificing flavor.

You’ll be hard-pressed to figure out which is better, your tried-and-true lobster pasta or this delicious rendition.

This one will seal the deal if you need a gourmet recipe to serve to that special someone.

You use a combination of lobster mushrooms, lobster stock, and actual lobster to create this umami-rich farrotto.

While this recipe certainly goes heavy on the ingredients, making this dish is so worth it.

Imagine taking that first forkful after toiling away in the kitchen for an hour and a half.

Your palate will be overwhelmed by deliciousness in the best way possible.

Nothing beats a creamy cup of New England chowder on a cloudy day.

With this recipe, you can enjoy the seaside flavor even if you live in the Midwest.

Plus, you’ll appreciate that this chowder is vegetarian, so you can serve it to a wide variety of diets.

After taking one slurp, you’ll be convinced that there’s lobster lurking beneath the soup’s surface.

You use dried lobster mushrooms, seaweed flakes, and Old Bay seasoning to achieve a fishy taste without any seafood.

This recipe will become your new staple for cold, rainy days.

Imagine curling up to your dinner table with a good book and a bowl of this comforting soup.

If this sounds like heaven to you, do yourself a favor and make this amazing chowder.

Take your vegan mac and cheese to another level with this sensational rendition.

Vegan mac and cheese is one of the best plant-based comfort foods out there.

Over the years, plant-based cheese sauces have gotten so much better.

Now, be prepared to get blown away by this elevated version.

By adding sauteed lobster mushrooms to the mix, you’re able to create a rich, gourmet mac and cheese.

Okay, don’t be intimidated by the 3 hours and 30 minutes of cook time.

After one taste of this lobster mushroom ceviche, your palate will be shot into flavor utopia.

Seriously, this authentic Peruvian ceviche will have you craving lobster mushrooms all the time.

Between the fresh citrusy flavors, decadent lobster mushrooms, and zingy garlic, your palate will be in for one tantalizing treat.

Make this recipe whenever you’re craving a flavor-packed soup for a wintery Sunday dinner.

You’ll love how the lobster mushrooms add a unique, fishy taste to this vegan recipe.

You might be thinking the lobster mushrooms are the star of the show here. But they’re neck-in-neck with the amazing ginger broth.

It results in a rich, buttery broth packed with umami.

You won’t believe how much creaminess is in this vegan mushroom soup.

Not only does it taste similar to its non-vegan counterpart, but you’ll appreciate how much better this soup makes you feel.

This recipe allows you to skip the post-cream bloat without sacrificing scrumptious flavors.

Trust me, the next time you have an hour to spare, do yourself a favor and make this amazing soup.

10 Best Ways to Use Lobster Mushrooms

These lobster mushroom recipes are tempting, tasty, and so unique! From tacos to bisque to mac and cheese, these plant-based dishes are sure to please. 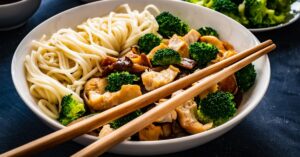 10 Oyster Mushroom Recipes You Have to Try