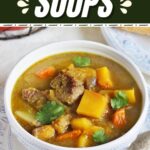 Grab your stock pot and get your tastebuds ready because today, we’re slurping some flavorful Jamaican soups!

Jamaica is known for its white sandy beaches and spicy Jerk chicken. But did you know they also make some pretty stellar soups?

They have rainy days, too, after all. And nothing beats a big bowl of something warm when it’s cold and gray outside.

So pick one of these Jamaican soups the next time you’re in the mood for a quiet night in. They’re best served with a piece of crusty bread and a good book.

Let’s kick things off with a Jamaican twist on a classic American soup. Yep, we’re talking about a veggie-filled rendition of chicken noodle.

If you’re looking for a scrumptious soup this winter, this recipe is it! It’s so easy to make and is unbelievably hearty, too.

There’s no need for grilled cheese with soups like this around!

Pepper pot soup is a common Jamaican recipe with many varieties. This particular version is a vibrant green and aromatic soup full of love.

As you would expect from the name, peppers are a warm welcome in this dish.

This comforting soup is full of delicious and authentic Jamaican flavor. But if you want less heat, feel free to omit the bonnet pepper.

Gungo peas are a common legume in Jamaican cuisine, making this dish more like a bean soup than European pea soup.

You’ll notice the term “ground provisions” in many Jamaican recipes. These are potatoes, taro, and yam (or other root veggies).

While this recipe is vegetarian at its core, you can add ham for a non-vegan version.

Either way, the vegetable base is thick and delicious!

Most people don’t think of soup when they imagine the tropics, but they probably haven’t had this soup!

In fact, Caribbean fish tea is one of my favorite island-style soups of all time.

You’ll need fish, of course. And most white fish make a terrific addition to the brothy base.

Aside from seafood, this recipe also has potatoes, carrots, and aromatics. The culminating soup is loaded with spice, flavor, and tender fish. Wow!

And since there are so many colds going around these days, why not try out this Jamaican chicken foot soup?

You’ll start by boiling the chicken feet and removing the claws. When tender, remove the skin (but don’t throw it away – it’s full of nutrients!).

The remaining soup recipe is an authentic chicken soup with warm spices and vegetables.

This Jamaican classic is a soup made for adventurous and daring eaters.

It’s said to be an aphrodisiac, with several components of a male goat mixed in, including goat head, tripe, and testicles.

If you want a less adventurous meal, opt for regular goat meat instead.

With rum, ground provisions, and a healthy dose of protein, this soup is unlike any other. Oh, and don’t forget the dumplings!

I have a hard time resisting delicious dumpling soup – especially one this yummy!

This Jamaican version is vegan and made with pumpkins for a rich and creamy finish!

The combination of veggies, coconut cream, and spice hits the spot every time. This may just be my favorite soup on this list!

Traditional mutton soup is often referred to as a Saturday soup. And in Jamaican culture, Saturdays are revered as the day for soup.

This mutton dish is perfect for a rainy day, with savory meat and loads of root veggies.

And again, I would call this recipe a stew with how hearty it is!

Of course, no Jamaican soup is complete without dumplings. Yum!

When you think of Jamaican food, you likely think of jerk seasoning. So, this recipe utilizes that famous flavor in a brothy veggie soup!

This scrumptious and soul-warming meal is loaded with beans, corn, potatoes, and chicken sausage.

Mix that with jerk seasoning, broth, and coconut cream, and you’ve got a winner.

The next time you’re in the mood for a warm bowl of soup, dig into this recipe. Trust me, you won’t regret it!

I’m sure we’ve all had our fair share of chili this winter. But this Jamaican recipe knocks the socks off a traditional chili!

There are loads of kidney beans, spices, and ground provisions in this recipe. Not to mention hearty dumplings and a thick and creamy broth.

You’ll feel the heat from the bonnet pepper after just one spoonful. So be sure to have some water at the ready!

10 Most Popular Jamaican Soups for Winter

Grab your stock pot and get your tastebuds ready because today, we’re slurping some flavorful Jamaican soups! They’re warm, hearty, and oh-so-comforting. 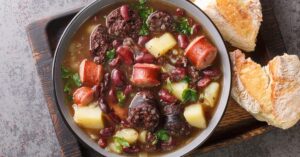