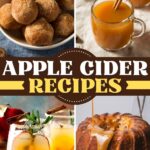 If you love everything about fall, I have good news! There are plenty of apple cider recipes out there beyond just the drink, and you won’t have to wait until fall to make them!

When fall rolls around, it’s normal for people to go a little crazy when it comes to apple cider.

You can add it to many different things, including soups, desserts, cocktails (or mocktails), main courses, and more.

It’s much more versatile than people seem to think, and these 25 recipes prove that like nothing else could.

There is such a wide variety here that it’s hard to know where to start. Still, if you have some leftover cider (or are just looking for new excuses to buy it), give these recipes a try.

With thick, tender chunks of beef and plenty of hearty veggies, it’s hard for anyone to say no to a second bowl of slow cooker beef stew.

When you add apple cider to the mix, though, it makes it even more delicious. It gives it a rich, underlying sweetness that enhances the stew’s overall flavor.

If you’ve ever had a donut hole, you already know how yummy they are. These are even better because they contain cinnamon, apple cider, nutmeg, cloves, and more.

Additionally, because you’ll bake them instead of frying them, they’re healthier than deep-fried donut holes. (They’re still donut holes, though, so don’t go overboard.)

This gorgeous golden cocktail is basically an apple pie in a glass. You’ll start with a champagne base. To that, you’ll add apple cider simple syrup, apple cider, and your chosen garnishes.

I like to use silver and gold sparkling sugar for the rim, as well. It just makes the drink more festive.

These cookies are a fall favorite around my house. They’re unbelievably soft and crumbly, and the apple cider icing is absolutely heavenly.

There are also chunks of real apples in these cookies, along with cinnamon, nutmeg, and more. And if that isn’t enough to make you want to try them, they’ll make your house smell great, too.

If you love the Moscow mule but are looking for a drink that’s a bit more fall-friendly, give this 5-minute, 4-ingredient recipe a try.

It takes the traditional Moscow mule (vodka, ginger beer, lime juice) and adds four ounces of apple cider. The drink retains its usual crispness, but the apple cider mellows it out some.

If you’ve ever had pulled pork that was so juicy and had such a sweet and savory flavor that it made you want to go back for thirds, you’ve probably had apple cider pulled pork.

With this recipe, you can make it yourself. You’ll only need ten ingredients, and it shouldn’t take you longer than an hour to make enough for the whole family.

These short ribs have it all. They’re tender and melt-in-your-mouth scrumptious. The caramelized onions are perfect, and the cider adds a sweet smokiness that’s hard not to love.

The garlic and veggies pair well with the meal, and although the apples are optional, I always add them myself as they give the dish a lightness that you can’t match without them.

Want something that tastes like donuts but looks even more impressive? Apple cider bundt cake is just the thing. It’s gorgeous, and it has a rich apple cider donut flavor.

As is the case with most bundt cakes, it takes a bit of time to make this one, but believe me when I tell you that it’ll impress anyone who sees or eats it, so it’s time well spent.

If you’re a fan of sweet biscuits, then you’ll love these sweet cinnamon biscuits.

They are warm and flaky with soft, tender centers and plenty of cinnamon and brown sugar flavor.

It’s the glaze that really sets them apart, though. It’s gooey, sticky, and messy, but when something tastes as good as this apple deliciousness, who cares?!

(Certainly not me or anyone else that I had to fight around the table just to get a second one.)

This recipe is for anyone looking to jazz up their everyday chicken dinner.

It’s quick and straightforward enough to make for a weeknight dinner, but it’s much more exciting than plain chicken.

Doing so infuses every bite of these thighs with a sweet and tangy flavor that is lip-smackingly good. Plate the chicken on a bed of rice or serve it with simple greens for a complete meal.

It’s hard to beat homemade soft caramels, but these might just be better than the originals. They’ll still have the same smooth, chewy texture and comforting caramel flavor.

However, there are also hints of apple cider, cinnamon, and sea salt. The combination makes these some of the best caramels you’ll ever try.

When it comes to making the best Thanksgiving turkey, it’s all about the brine. That’s what gives the crispy skin its robust, herby flavor, so you have to get it right.

It gives your turkey a sweet, smoky, savory flavor and will help ensure you get the crispiest skin possible. Give this brine a try the next time you’re baking turkey. You’ll thank me for it.

Any dinner I can make in 30 minutes or less using only one pan is a dinner that I will enjoy. It just so happens, though, that this one is also flavorful and filling as well as convenient.

Thanks to the apple cider, the tender chicken is so juicy, and the caramelized apples are a real treat. Add a dash of rosemary, and you’ll have the whole family begging for more.

If you’re in the mood to just enjoy apple cider but want it a bit bubblier, simply combine your fresh cider with a fourth teaspoon of dry champagne or baker’s yeast.

It has all the flavor of traditional apple cider – but with bubbles!

Just as you can tweak the Moscow mule to make it more fall-like, so too can you adjust the old-fashioned to do the same thing.

It shouldn’t take more than 5 minutes to whip up this drink, and all you’ll need is apple cider, bourbon, maple syrup, bitters, and your garnishes (apples, oranges, cinnamon sticks, etc.).

I wasn’t sure about apple cider fondue at first. I mean… cheese and apple cider? But then, I thought about how much I enjoy slices of apples with cheese sticks and gave it a try.

It’s terrific. The cheese is gooey and hot and has the most amazing – though hard to describe – flavor. And you can use practically anything to serve it.

It always takes a bit of time to make a glazed ham, but it’ll definitely be worth the trouble if you use this recipe for the glaze.

You’ll also add some onions and apples to complete the dish. It makes an ideal main course for any special occasion.

Crunchy and sweet with soft, tender centers and an apple cider-flavored sticky glaze, these apple fritters are always at the top of everyone’s list of fall requests.

You can even liven up the traditional sidecar with a splash of apple cider, a few sage leaves, and some nutmeg.

If the original Sidecar isn’t sweet enough for your tastes, you might prefer this one instead.

This salad might be simple, but that doesn’t mean it isn’t delicious.

My advice? Just make a big batch of the stuff and put it in the fridge because once you try it, you’ll want to use it on all of your salads.

Of course, if all you’re craving is the squash and don’t want the salad to go with it, cider-glazed butternut squash is a super tasty side dish that doesn’t take all that much work to make.

It’s slightly sweet, earthy, and surprisingly filling! Plus, it pairs well with almost anything.

It’s hard to beat sweet and smoky grilled chicken, and this recipe for apple cider thyme chicken is one of the best I’ve ever tried.

It takes only 5 minutes to prepare and another 20 until they’re ready to eat. The ingredients list is simple, too.

Try them at your next barbecue; you’ll be glad that you did.

If you’re a pancake lover who’s never tried apple cider pancakes, this recipe is about to blow your mind.

These fluffy, apple-packed pancakes are so addictively good that they should be illegal, and I’m not exaggerating when I call them apple-packed. There are apples in every bite.

You’ll use apple cider for the pancakes, add pan-fried cinnamon apples into the batter, and you’ll even top the stack with caramel apple cider syrup.

Are you hungry yet?

If not, you will be once you smell them! And FYI: You won’t want to share these, so either make more than you could ever possibly eat or only make them for yourself.

If you like the idea of root beer floats but aren’t really into root beer, try these caramel apple cider floats instead—same principle, but with a much sweeter, more apple cider flavor.

You can make them in 5 minutes with nothing more than ginger ale, apple cider, vanilla ice cream, and caramel sauce. Enjoy!

Mulled apple cider crullers are beautiful, have a nice crunch to the outside with warm, soft centers, and are covered in a sticky chai glaze.

If you like apples, cinnamon, and deep-fried dough, you’ll adore these tasty treats.

25 Apple Ciders for a Taste of Fall