Get ready for the big game with these tempting vegan Super Bowl recipes!

If you’re anything like me, I get more excited about Super Bowl food than the game.

Who doesn’t love a night of nothing but appetizers?

These vegan Super Bowl snacks check all the boxes. They’re cheesy, meaty, savoy, and perfect to munch on all night.

From vegan sliders to tasty dips, tacos, and pizza rolls, I’ve collected some of the best vegan Super Bowl recipes.

Your friends will love them, and they won’t miss the meat or dairy!

Chickpeas are a great ground beef alternative because they are high in protein and just as filling.

The secret to transforming chickpeas into smoky and nutty burgers is the addition of liquid smoke and nutritional yeast.

Who can resist a bread bowl filled with spinach dip?

This recipe is a great game-day snack that may not make it to the end of the party.

It’s incredibly hearty, thanks to the spinach, fresh garlic, and onion.

To keep it vegan, add vegan cream and vegan mayo.

It’s super simple, and you can create a whole board of dippable treats like crackers, veggies, or extra bread.

Queso dip is a must-have for any football game, but it’s essential for the Super Bowl.

This vegan option utilizes a blended cashew and potato base with bold seasoning to create a very thick and hearty dip.

Serve this incredibly creamy vegan queso with a big bowl of tortilla chips, and it won’t live to see halftime.

Oh, how I love Chipotle’s guacamole. It’s so silky smooth, like butter, with a hint of flavor from red onions, lime juice, and cilantro.

And making it at home is easier than you think.

Chipotle uses simple, fresh ingredients, and their guac is no exception.

It’s tart, creamy, and just the right amount of spicy, thanks to finely chopped jalapenos.

This guacamole with a bowl of tortilla chips will surely be the breakout hit on game day.

I love these vegan buffalo wings because they taste rich and meaty sans the meat.

This recipe uses one of my favorite meat substitutes: homemade wheat gluten!

It’s easy to whip together in a flash with simple pantry staples and is so flavorful.

They’re breaded, deep-fried, and smothered in spicy buffalo sauce. Serve them alone or with a sampling of dipping sauces.

Even the die-hard meat eaters at your next Super Bowl party will have difficulty turning down these hearty vegan quesadillas.

With a trio of peppers, smoky and savory black beans, and a vegan cheese sauce, it’s like a flavor explosion.

Be sure to whip up a big batch of these quesadillas because they will go fast!

It’s not the stuffing that makes egg rolls non-vegan, it’s the wrapper!

With vegan egg roll wrappers, you can incorporate all the classic egg roll fillings like cabbage, ginger, carrot, mushrooms, and garlic.

Deep-fried to golden perfection and served with a soy sauce dip, these vegan egg rolls will go fast!

Those frozen bags of beefy taquitos are a crowd favorite, but I have yet to track down a vegan option.

The good news, however, is that making vegan taquitos at home is super easy!

The stuffing uses potatoes as a meat substitute and incorporates plenty of rich and spicy Mexican seasoning.

Arrange them on a plate, and bake until golden and crispy. My mouth waters just thinking about it!

Don’t buy frozen vegan pizza rolls when you can make your own at home!

This recipe is a little fiddly, but I promise you it’s worth the effort!

You can stuff them with all your favorite vegan pizza toppings with a handy ravioli press.

They bubble up to golden perfection in the oven (no deep frier requires) and put those frozen bags of pizza rolls to shame.

Nachos are the ultimate game day food because you can just stand next to the nacho plate and stuff your face!

These fully-loaded nachos ensure that no tortilla chip is left behind.

With so many toppings, every bite delivers massive flavor.

Plus, it still provides that meaty kick from seasoned TVP, or textured vegetable protein.

Even the meat eaters at the party will love these vegan nachos.

These vegan mozzarella sticks are just as gooey and cheesy as their dairy cousins.

Using vegan mozzarella (Miyoko’s works best) and a tasty breadcrumb seasoning, these mozzarella sticks are sure to impress.

You can serve them with your favorite store-bought marinara or take things to the next level and make your marinara dipping sauce.

If you need to feed an army, a big bowl of chili is always a great option.

This easy vegan chili recipe comes together quickly and is a great way to feed a large crowd.

It’s hearty and smokey, thanks to robust seasonings, veggies, and so many beans!

For your Super Bowl party, I like making a chili bar.

You can include toppings like Fritos, vegan sour cream, tortilla chips, green onions, and vegan cheeses.

While traditional breaded and deep-fried onion rings are exactly healthy food, this recipe is pretty close!

It gives your deep-frier the night off and fires up the handy air fryer instead.

They have a savory bread crumber batter that clings to every corner of the onion ring and bakes to golden perfection.

I love sweet potato fries because they’re healthier than their starchy cousins.

Plus, they’re delightfully sweet and deliver a bit of extra fiber as a bonus.

This recipe is super simple and comes together in a snap. Just chop, toss, and bake. That’s it!

Pair these fries with tasty dipping sauces, and watch them disappear!

With a delightfully crunchy outside and a nice and tender inside, they’re 100 percent better than processed meat chicken nuggets.

The marinated tofu makes the insides of these vegan chicken nuggets so delicious.

While they’re great on their own, they’re even better with an array of fantastic dipping sauces.

Just look at those tiny little tacos! This recipe is like a plate of nachos, but instead of tortilla chips, it’s tacos.

Are you firing up the stovetop yet?

Each taco gets a meaty filling using your favorite seasoned meat crumbles. I love Impossible meat crumbles the best.

No one can resist the siren call of baked potato skins.

With minimal chopping, preparing a big batch to feed a game-day army is easy.

They are cheesy, creamy, and so very filling.

Baking the potato with the skin on yields a delightfully crispy crust that pairs well with rich and creamy fillings.

It tastes like a loaded twice-baked potato sans the bacon.

Hummus is a great party dip, but it’s expensive to buy in large quantities.

Once you learn how to make your own in big batches, you’ll never return to store-bought!

This recipe only incorporates seven ingredients and makes a giant batch that tastes much better.

Pair this hummus with pita bread, crackers, and a host of crispy, crunchy veggies.

Even the meat eaters at the party will have a hard time resisting this vegan pizza’s bright colors and flavor.

It’s brimming from edge to edge with bright flavors from a host of brightly colored roasted veggies.

Drizzle some homemade cashew cream on top, and watch all the other pizzas at the party suffer from serious neglect.

You can layer tater tots on just about anything, and they’ll be a hit.

This vegan tater tot casserole pairs puffy and salty tater tots on top of a hearty layer of Impossible beef, veggies, and gravy.

Think of this casserole as an easy and vegan version of shepherd’s pie. Yes, please!

Vegans love charcuterie boards, too! Often, vegans can only indulge in the crackers.

But this unique charcuterie board is vegan-friendly and just as impressive and delicious.

It’s heavy on vegetables and fruits and includes vegan-friendly cheese and meats.

For impressive vegan meats, Sweet Earth Foods makes a fantastic veggie sausage and harmless ham that looks so pretty on a platter.

Why is baba ganoush so fun to say? It just rolls off of the tongue!

Baba ganoush is similar to hummus, but instead of chickpeas, it incorporates eggplant.

Serve it with pita wedges, veggies, and crackers.

If you have a lot of people coming over for the big game, this chili mac is always a crowd-pleaser.

The best part? It all comes together using the same pot.

It combines smoky beans and spices with tender pasta noodles and fresh herbs.

It’s so filling that you might have to repurpose halftime as naptime!

It’s lean, green, and unlike any other dip on the table!

What I love most about this edamame dip is that it’s decadently creamy without needing one drop of dairy or dairy alternatives.

Mac and cheese bites are among the best appetizers, and this vegan option is no exception.

They utilize chickpea pasta for a nutty flavor that pairs well with vegan cheeses.

Plus, they’re baked instead of deep fried, which makes them slightly healthier than other carb-heavy fried mac and cheese bites.

These vegan Super Bowl recipes will keep game day plant-based! From sliders to dips to wings and nachos, you’ll find all of your favorites on this list and more! 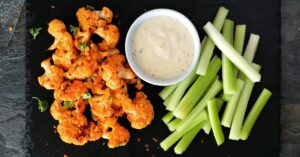