Whether you know about them or not, there are many different types of peppers.

Peppers come in all shapes, sizes, and colors. There are sweet peppers, and there are spicy peppers.

There are bell peppers, and there are jalapeno peppers.

Then there are all the other types of peppers you might not have heard of before.

Don’t worry, though. I’m here to introduce you to them!

I’ll tell you about the different types of peppers and list their Scoville Heat Unit scores and what they look like. Keep reading!

25 Types of Peppers and Their Heat Scale

Everybody knows what peppers are, even if they don’t know all the different types.

However, not everyone knows about the Scoville scale.

The Scoville scale is “a measurement of the pungency of chili peppers.”

Milder peppers rank lower on the scale, while hotter ones rank higher.

Each pepper is awarded a number of Scoville Heat Units or SHUs.

For the 25 peppers below, I’ve included their Scoville score beside their names.

Whether red, orange, or green, bell peppers are some of the mildest.

In fact, they rank a big, fat ZERO on the Scoville scale because they’re sweet peppers.

They’re also some of America’s most widely grown and consumed peppers.

They come in multiple colors and taste great raw or cooked in recipes.

They’re a popular option for stir-fries, salads, and for making paprika.

With a SHU of zero to 500, banana peppers are slightly spicy.

(They’re still considered sweet peppers, though.) Unlike bell peppers, they also have a zingy, tangy taste.

They often come pickled in brine, giving them a waxy texture and a juicy bite.

You can add them to salads, sandwiches, pizza, and other recipes. Mostly, people eat them raw or pickled.

The Scoville range for shishito peppers goes from 100 to 1000. That seems like a pretty big leap, right? That’s because it is.

Most shishito peppers are pretty mild. However, now and then, you’ll bite into one that has a real bite!

Eating them is like playing Russian roulette with peppers.

You can eat them raw, but mostly, you’ll find them charred, grilled, or blistered. (Particularly in Asian or Japanese restaurants.)

Some people call them pepperoncini, while others refer to them as friggitello peppers.

Whatever you call them, they’re the same mild pepper with a tangy flavor.

They look and taste almost precisely like banana peppers. You can use them in the same ways.

Have you ever had a pimento cheese sandwich? If so, you’ve likely had pimento peppers, even if you didn’t know.

They’re also called cherry bell peppers and are medium-sized, red, and not too hot.

As their name implies, they’re great for chopping up and adding to pimento cheese.

Check out the Scoville scale for hatch peppers: zero to 100,000! That’s insane, right?!

Also known as New Mexico chiles, they have an earthy, robust flavor. There’s also a touch of smokiness in their taste.

They’re about 8 to 13 inches long and light greenish.

They’re large, bright green peppers that start out mild and get hotter as they ripen.

Jalapenos are some of the best-known of all hot peppers.

Like banana peppers, they typically come pickled in brine. However, you can also buy them raw.

Most people think of them as green, but they turn red when ripe.

They’re relatively small peppers with a sweet, bell pepper-like flavor. (Only with a lot more heat.)

Typically, people don’t eat jalapenos raw. Instead, they add them to sandwiches, soups, salads, and more.

Despite how hot people think they are, they’re on the low end of the spicy pepper scale.

You can also remove much of the bite by deseeding them.

Serrano peppers are small green peppers that turn redder as they ripen.

They have a fresh, earthy flavor similar to jalapenos but are hotter.

They’re also a popular ingredient in salsa and mole sauces.

Powdered cayenne pepper is one of my favorite seasonings.

However, as little as a fourth of a teaspoon too much can ruin your dish. It’s that hot.

You can occasionally find these orange or red peppers raw and whole.

Most of the time, the powdered form is all you’ll get.

Though habaneros come in many colors, red and orange are the most prevalent.

They’re a popular ingredient in fruit-based salsas because of their sweetness.

Thanks to their heat, most people never notice that sweetness, though.

For the longest time, ghost peppers were considered the hottest of the hot, and for good reason!

These Indian-native peppers are extremely hot. They’re over 100 times hotter than jalapenos.

People occasionally take a bite of raw ghost pepper on a dare or for internet fame.

Unfortunately, they’re far too hot to eat raw for any other reason.

Notice how I said ghost peppers were considered the hottest of the hot? That’s because Carolina reapers dethroned them in 2017.

Take a bite of these bad boys at your own risk.

In all my years on this earth, I’ve never seen a Tabasco pepper in the flesh.

I know Tabasco peppers the same way most people do, from Tabasco sauce.

The peppers are small (about two inches long) and bright red. They’re hot and actually juicy on the inside, unlike most peppers.

The raw peppers are much hotter than the sauce of the same name.

Though Anaheim peppers have a bit of spice, they aren’t all that hot.

They range in size from 6 to 10 inches and are dark green to red.

They’re some of the most famous and widely consumed of all the chile varieties.

You can purchase them raw, dried, or canned in most grocery stores.

They often grow in odd, twisting shapes and have no heat.

You can eat them raw, but they’re primarily used in French cuisine.

They have a distinctive peppery taste with hints of fruity sweetness.

Piri piri peppers have an adorable name to match their adorable appearance. They almost look like small cherry tomatoes.

Don’t let their cuteness fool you. These little guys are hot, hot, hot. They aren’t very popular in America.

But you’ll find them often in African and Portuguese cuisine.

They’re also the base for various hot sauces, specifically in Africa.

Though not as well-known as habaneros and poblanos, rocotos often appear in salsa.

They have a similar Scoville score to habaneros and look like bell peppers.

They come in a wide range of colors and are relatively large.

They also have dark black seeds that set them apart from other pepper varieties.

Most guajillos are about as hot as jalapenos, though some can get much hotter.

In their raw form, they’re smooth, red, and between three and five inches long.

Typically, they come in dried form. People often use them in salsa, mole sauces, and Mexican cuisine.

To have such a sweet, non-threatening name, Scotch bonnet peppers are hot.

People overlook them because they don’t have a name like ghost pepper or Carolina reaper.

Still, they’ll just as quickly set you on fire.

They take their name from their scrunched appearance and come in various colors.

Do you enjoy Thai cuisine? If so, you’ve probably had bird’s eye chili peppers, which are popular in Thailand.

They’re hotter than cayenne peppers but not quite as hot as habaneros.

Cubanelle, or Cuban peppers, are slightly hotter than bell peppers.

However, they’re still considered sweet peppers and don’t have much bite.

They’re great for use in fajitas and stir-fries, but you can substitute them for bell peppers in practically any recipe.

They’re mild and sweet and taste great when roasted.

It’s rare to find them raw, though they sometimes pop up in specialty stores.

More often, you can buy them canned and preserved in oil.

You can also eat them raw, but they’re pretty spicy. (Hotter than jalapenos.)

If you can get past the heat, they have a wonderful sweetness.

They’re great for adding to soups, stews, and sauces.

Despite being only the size of a pea, these peppers are the most expensive in the world.

They grow in Northern Peru and are bright yellow and perfectly round.

Peruvian chefs love adding them to their dishes, perhaps for sheer decadence’s sake.

Outside of Peru, though, they’re almost impossible to find.

25 Different Types of Peppers and How to Use Them

Try these different types of peppers for meals full of flavor! From banana to poblano to jalapeno, these peppers pack a punch! 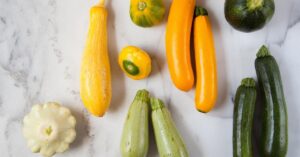 25 Types of Squash That Go Beyond Butternut