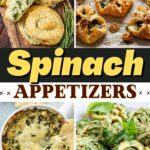 Spinach is an incredibly magical, almost witchy food because even people who don’t like it – kids and adults alike – still love spinach appetizers.

Making them is such an easy way to sneak veggies into unsuspecting guests’ bellies!

If I put out a bowl of spinach puffs, spinach guacamole, spinach and bacon pinwheels, or spinach dip with breadsticks, everyone devours them.

Sauteed or stewed spinach doesn’t look appealing, so several people assume they won’t like it. But spinach tastes great.

And if you don’t believe me, give these 20 spinach appetizers a try. You’ll be a spinach lover in no time.

If you’re looking for a way to ease into spinach appetizers, fresh spinach guacamole is just the thing.

Adding spinach makes your guac even healthier, but it doesn’t alter its taste.

The other flavors – cilantro, jalapeno, cumin, etc. – are so robust and flavorful that you won’t even really know the spinach is there.

You’ll still get all its incredible health benefits, though!

I love spanakopita triangles so much that I regularly make them for lunch, dinner, or snacks – not just appetizers.

The flaky, crispy phyllo dough gives them a delightful texture, and the feta cheese and dill provide a bright, tangy flavor.

If you’re looking for something quick and easy, you can’t go wrong with these three-ingredient pinwheels.

All you’ll need is spinach dip (store-bought is fine), puff pastry, and parmesan.

If you want to make from-scratch spinach dip for stuffing the dough, you can.

It takes a little longer, but there’s nothing like homemade spinach and artichoke dip.

Either way, these are fantastic. They’re soft and chewy with gooey dip centers.

Rainbow veggie pinwheels are excellent, too, and they’re a lot of fun because of all their colors.

I use spinach herb or sun-dried tomato tortillas for extra vibrancy.

“Rainbow” is an apt description. And yes, they’re yummy, too.

These interesting green balls may be small, but they have a ton of flavor.

They’re incredibly herb-flavored, and they’ll have a slight crunch, thanks to the breadcrumbs.

They’re easy to make and much healthier than more traditional appetizers like chips, pigs in a blanket, and meatballs.

Of all the spinach artichoke dip varieties out there, Applebee’s dip is probably the best.

It’s so creamy and cheesy, and the balance of spinach, artichokes, and garlic alfredo is perfect.

It’s a hot, gooey treat that tastes great on chips, veggies, crackers, toasted pita bread, or pretty much anything else.

It’s hard to know what to like best about spinach puffs – the warm, buttery puff pastry shell, the salty bacon, the tangy feta, or something else.

Whatever it is, there’s no denying that these bite-sized treats are a mouthful of sheer deliciousness, and you won’t be able to stop at just one.

You can whip up a batch of mini spinach and ricotta calzone bites in just 20 minutes with only seven ingredients.

These things may be meat-free (unlike most calzones), but you’ll never even miss the meat once you bite into one and get your first taste of spinach, three cheeses, and garlic.

Serve them with marinara for dipping or enjoy them alone. They’re scrumptious either way.

Stuffed mushrooms are always a big hit when it comes to appetizers, and you can whip up a dozen in less than 30 minutes, so they’re kind of awesome.

Each one is overflowing with cheese and has a phenomenal herb flavor and slightly crunchy panko breadcrumb topping.

They’re tiny, but they’ll have a massive impact on everyone who tries them.

This dip is for anyone who loves cheesy spinach dip but also needs some meat in their appetizers. It’s a simple one to pull together.

This particular recipe also calls for ham, but you could substitute crab, lobster, chicken, bacon, or whatever other protein you like best.

Either way, your guests will love it.

Here’s another exciting recipe for spinach pinwheels, and this one includes bacon!

Between that, the buttery crescent roll crust, and the three types of cheese, these are pretty incredible.

And that doesn’t even consider the spinach, garlic, lemon pepper, and other ingredients.

Trust me: If you enjoy cheese, herbs, and veggies, these will be a fast favorite for you.

Spinach artichoke dip is superb, and I’m not sure anyone would disagree with that.

But if you’re looking for something a little different, this hummus spinach dip is tasty, too.

You’ll only need four ingredients to make it – pre-made hummus (or you can make your own), fresh spinach, shredded white cheddar cheese, and Creole (or Italian) seasoning.

The dip retains the same creamy, thick texture of hummus but has more cheese and spices. It’s a win-win.

It takes some time to make Lebanese spinach pies, but they’re super scrumptious once you get them right. They’re a little hard to describe, though.

That gets you somewhere in the ballpark, but it doesn’t quite do these justice.

These appetizers are some that you’ll just have to try for yourself, but you won’t regret the experience.

Sliders are always a fun appetizer idea, especially before a big game or an outdoor event, but having the same old hot ham and cheese sliders can get boring.

Try something new with these baked pesto chicken sliders.

They’re unlike any you’ve ever had – packed with shredded chicken, mozzarella, pesto, and spinach.

The topping is perfect, too. It’s buttery, garlicky, and has another wallop of cheese. They’re a bit Italian, a bit Mediterranean, and a bit something else.

These white, yellow, and green squares are so pretty and interesting that everyone will want to try them just to say they did.

Of course, after that first bite, they’ll keep coming back for more.

They’re cheesy, filling, and require only eight ingredients to make, so be sure to bookmark the recipe.

You can make this spinach artichoke flatbread as an appetizer if you like, but it makes an excellent lunch or light dinner option, as well.

It has a yummy garden-fresh flavor and features plenty of your favorite veggies and herbs – garlic, parsley, artichokes, cherry tomatoes, spinach, etc.

Because there’s no tomato sauce (only olive oil), it won’t weigh you down as much as traditional pizza. In fact, it’s pretty healthy for a faux pizza.

If you love spinach dip but find dip too messy or inconvenient to serve at large gatherings, put it inside your breadsticks.

You’ll get the same phenomenal flavors with none of the mess (or double-dipping).

You can even go the extra mile and arrange the sticks into a Christmas tree to make them more festive.

I know! Another spinach dip recipe, right!? But this one is different from all the others because it has more heat and spice and a distinctly Mexican flair.

It’s still spinach dip, and it’s still creamy, cheesy, and ideal for dipping, but you’ll give it a whole new twist.

Of all the recipes on this list, this one probably has the most spinach flavor, which is a good thing. These are delectable.

The contrast between the crispy crust and the creamy topping is terrific, and the spinach and various cheeses pair well together.

Unfortunately, these are so small that you’ll be popping them in your mouth whole without realizing how many you’ve eaten.

But hey, they have spinach in them! That’s healthy, right?!

Spinach artichoke pull-apart bread may look crazy and messy and like something that’s just too strange to eat, but don’t let that appearance fool you.

This stuff is the bomb.

It’s basically creamy, flavorful spinach artichoke dip, but instead of dipping it, you’ll add it to the bread.

It makes the flavor more intense, and the tactile sensation of pulling apart the gooey bread makes the whole experience even better.

There’s just no way to go wrong with this bread. Everyone will love it.

These spinach appetizers will disappear fast at any party, and even kids love them! From pinwheels to dip to stuffed mushrooms, spinach is the star of these tasty bites.