While it isn’t as popular as chicken or turkey, the pheasant is a truly delicious bird. To eat more of it, I scoured the internet looking for pheasant recipes.

I was pleasantly surprised at just how many excellent options I found.

There are pheasant recipes of all kinds, and you can add the bird to practically anything!

After a few months of trial, error, successes, and failures, I finally figured out which pheasant recipes worked for me and which ones didn’t turn out so well.

This list is the culmination of my efforts. I hope you enjoy trying them as much as I did!

1. Pheasant in Mushroom and Wine Sauce

The wine sauce in this dish makes the pheasant, which can sometimes come out dry, as juicy and tender as any meat you can cook.

Then, you’ll add onions, garlic, a veritable plethora of mushrooms, and several other ingredients.

The result is a rich, savory, somewhat earthy meal that’s hearty enough to keep you full all night.

The mushrooms highlight the slight gaminess of the pheasant, but the wine sauce rounds out the edges so that every bite is delicious.

Even though there’s no soy sauce, peanut sauce, or Sriracha, this dish has a distinctly Asian flair.

It’s simple to make, requiring only six ingredients (plus salt and pepper to taste).

With nothing more than pheasant, red wine, lemon juice, parsley, garlic, and olive oil, you can make a light meal peppered with garlic and bursts of citrusy yumminess.

If you’d like to cook pheasant but don’t know how, this recipe for pressure cooker pheasant is an ideal place to start.

All you have to do is bread your pheasant with an egg wash and flour mixture and brown it in some oil.

Then, let it cook in the pressure cooker for about 25 minutes.

Cover it in a buttery sauce once it’s done, and enjoy!

Oven-roasted pheasant is for anyone who loves tender, succulent white meat and perfectly crispy, well-seasoned skin.

It’s garlicky and flavorful, and it tastes incredible alongside the chorizo, parsnip sticks, and a fresh garden salad.

Pheasant stew is warm and filling, and there’s nothing better on a long, cold winter’s night.

It’s thick and chunky, and the meat is so tender that it practically falls off the bone.

It’s full of protein, herbs, fruits, and veggies. In short, it’s a healthy, hearty meal that you’ll want to make again and again.

If you can make a chicken, turkey, beef, or veggie pot pie, then you can whip up this pheasant pot pie just as easily.

You’ll use refrigerated pie crusts to get that gorgeous, scrumptious, golden-brown crust, and the broth, butter, and milk combine to make a rich, creamy sauce.

The meat is succulent, and the veggies are fresh and flavorful. This is one pheasant recipe that the whole family will love.

You may use spaghetti noodles in this pheasant pasta, but earthy dinner is about as far from spaghetti as you can get.

For one thing, there’s no heavy Ragu or Prego coating all the noodles.

Instead, you’ll make your sauce from red wine and just a few tablespoons of tomato paste.

The pheasant is where most of the flavor is.

You’ll cook it with garlic, celery, and onions, and then you’ll let it simmer with rosemary, sage, thyme, cinnamon, vinegar, mustard, and oregano.

It looks amazing, smells amazing, and tastes even better than that.

For this savory dish, you’ll marinate the pheasant overnight in whatever marinade you like best.

It gives the whole thing a sweet and savory Asian flavor that’ll make you think of your favorite Chinese restaurant, only better.

Plus, every bite nearly melts on your tongue.

If you’re looking for something with a bit more spice and robust flavor, try the roast pheasant masala.

It’s simple to make, requiring only 20 minutes to prepare and an hour to cook.

Your whole house will smell delightful while it’s roasting, but despite all the spice, the bird isn’t spicy.

It’s just spiced and incredibly aromatic, and it’ll fill your belly for hours.

On the other hand, if you want something spicy, these pheasant sticky fingers will bring the heat!

Think of spicy hot wings but made from pheasant instead of chicken.

After all, when it comes to wings – or sticky fingers, in this case – it’s all about the sweet and spicy honey wing sauce, anyway.

The meat is more of an afterthought.

This is mac and cheese like you’ve never had it before, unless, of course, you’ve had it with three different cheeses, pheasant, green chiles, onions, garlic, and more.

It’s creamy with a slightly crunchy breadcrumb topping, and you’ll taste plenty of delicious flavors in there besides just the cheese.

It takes a little work (30 minutes of prep and 45 to cook), but it’s well worth every second you spend on it, resulting in five-star-restaurant-quality mac and cheese.

If you prefer something simpler and quicker that takes practically no effort at all, you’ll love these three-ingredient grilled pheasant poppers.

All they use are pheasant breasts, jalapenos, and bacon.

If you can marinate meat, stick some ingredients on skewers, and throw them on a grill, you’ll have these hot, tasty treats covered!

Pheasant in mustard sauce is for those of us who prefer our meals to be a bit zestier.

When the recipe calls for lemon juice, Dijon mustard, dried marjoram, and garlic, you already know the depth of tangy flavor you’ll get.

These pheasant breasts take about 35 minutes to make, and your tastebuds will be moaning in delight after every bite.

Even pizza can benefit from a little upgrade sometimes, and what’s a better upgrade than gouda and pheasant?

This pizza might just be the fanciest pizza you’ll ever eat, but seriously, who cares?! It’s phenomenal!

And the fact that it’s easy to make is just one more reason to love it.

Assemble your pizza, and pop it in the oven for 15 minutes or so.

The cheese is gooey and delectable, the peppers add a bit of spice, and everything else is spot-on. Embrace the bougie.

Here’s another sweet and savory dish that’s perfect for fall.

The smoky, slightly gamey flavor of the pheasant pairs wonderfully with the sweet tartness of the apples, and the whole thing has a definitively fall spiced flavor.

Anyone who doesn’t enjoy this delightful dish doesn’t have working tastebuds.

Pheasant tacos may sound off-putting at first, but just think about how much you love shredded chicken tacos.

Yep, these are pretty much the same thing, but better.

The slightly caramelized pheasant is spectacular, of course, but honestly, the mango salsa is the real star of this show.

It’s sweet and spicy and one of the best things you’ll ever taste.

Still, they both feature pheasant and apples, and both are ideal for fall.

The apple brandy and apple cider really come through strongly in this dish, giving it a truly remarkable flavor that’s unlike anything else you’ve tried.

This meal isn’t one of the prettiest on the list, but it does have one of the most complex, unique tastes of the pheasant recipes I’ve tried.

I think it’s the wide variety of ingredients that makes it so exciting and hard to describe.

However, if you’re a fan of poultry, veggies, and rich sauces, you’ll enjoy it.

If you’d rather cook your pheasant in a more Mexican, south-of-the-border style, check out this recipe.

Best of all, it takes less than an hour to cook and feeds up to five people, so it’s an excellent option for family dinner.

All you’ll need to make this 20-minute dinner option is milk, white vinegar, pheasant breast, saltine cracker crumbs, and some oil for frying.

It’s pretty much fried chicken, but as are most pheasant dishes, it’s a tad more elegant than your standard chicken.

It’s still good enough to fool your southern cousins, though!

To make this straightforward dish, you’ll season your pheasant with salt and pepper.

Then, you’ll cook it in a butter and half and half cream sauce that’s just divine.

Once you’ve let it simmer to a golden brown, pop it in the oven and leave it alone for the next 90 minutes or so. It doesn’t get much simpler than that.

Pan-fried pheasant is a tender, tasty treat, and that’s before you cover it in the delicious sauce made from dry cider, butter, sour cream, and parsley.

You’ll also serve it with a crispy, golden-brown celeriac and parsnip rösti (which is similar to hash browns or fritters).

If you’re looking for a typical European-style dish, give this one a try.

I love any poultry served with a creamy sauce and mushrooms, and once you add puff pastry into the mix, I’m pretty much in heaven.

This is like a garlicky, herby, mushroomy pheasant sandwich on the world’s flakiest, most wonderful bread. There is no bad there.

If you’re looking to try something new this Thanksgiving, why not pair your cranberry sauce with pheasant instead of turkey?

It’s not quite as large, but it’s every bit as delicious, and its slightly wild flavor gives it just a little something extra.

Plus, it’s packed with protein, low in fat, and unbelievably simple to make. (And it takes a lot less time to cook than a giant turkey.)

This simple roasted pheasant dish is light and full of citrus and herb flavors.

If you’re looking for a main dish that goes well with anything – potatoes, carrots, salad, bread, soup, etc. – this is it.

You can make it with only 12 ingredients, but half of those are nothing more than herbs and spices.

The rest are pheasant, butter, an orange, white wine, bacon, and raisins.

All that is pretty easy to come by, so you shouldn’t have much trouble whipping this one up.

Switch up your meal routine with these easy pheasant recipes! From oven-roasted to stew to pot pie, you can make plenty of delicious pheasant dishes. 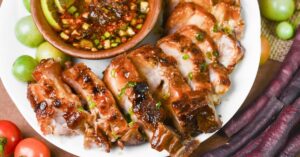