If you cook a lot of vegan recipes, you’ll need these nutritional yeast substitutes.

Because without it, your food will be seriously lacking in flavor.

Believe it or not, there are plenty of substitutes for nutritional yeast. And I’ll bet you have several of them in your kitchen already.

But in the right recipes, each of these nutritional yeast substitutes will work in a pinch.

But first, let’s talk about what nutritional yeast (or nooch) actually is.

What is Nutritional Yeast?

I get it. Nutritional yeast can be a little daunting.

The name sounds like something from a lab, and it is a fungus, after all! But trust me, nooch is worth the trouble.

Nutritional yeast is a deactivated strain of baker’s or brewer’s yeast often grown on products like blackstrap molasses, whey, and sugar beets. It’s a vegan source of protein and B vitamins, with a savory, nutty, and cheesy flavor that makes it a terrific vegan alternative to Parmesan cheese.

You can even use it to add a splash of color to some things.

Unlike regular yeast, you can’t use it in baked goods. But, if you want to liven up a savory vegan dish, it’s the best.

The following are my picks for the ten best nutritional yeast substitutes and alternatives.

As always, some are better dupes than others, and some will only work in specific recipes.

Try them out and see which you like best!

You’re probably familiar with chickpeas as an ingredient. I like them in salads, and homemade hummus is my jam!

But chickpea flour is a surprising substitute for nooch!

Buy it ready milled or go ahead and make it yourself – if you have a dehydrator and some cooked chickpeas, you’re in business.

(Roasting the chickpeas will also work.)

The taste is mild and unassuming. And it doesn’t have that same cheesiness that nutritional yeast does.

Still, you can jazz it up with other seasonings or allow it to take on the flavors of the recipe.

Either way, it’s one of my favorite nutritional yeast substitutes.

Parmesan cheese may be a better replacement if you don’t like conversions.

Use an equal amount of Parmesan to nutritional yeast, and it’ll give you the same wonderful cheesy flavor.

Of course, the biggest problem for some people is that it isn’t vegan or dairy-free.

That’s why nooch is so popular in the vegan world – it’s a fabulous cheese substitute.

But if that isn’t a problem for you, Parmesan is the best swap by far.

Just keep in mind that it’s saltier than nutritional yeast. Therefore, you may need to adjust for that.

Also, you can use vegan Parmesan in a one-to-one ratio if necessary.

I know what you’re thinking. Dried mushrooms for nutritional yeast?! Surprisingly, though, they make a decent replacement.

In addition to being cheesy, nooch has beautiful umami and nutty flavor profiles.

So, with their umami-rich and earthy goodness, dried mushrooms work well in that regard.

You can swap these out at a one-to-one ratio.

However, you won’t get any creaminess with mushrooms. Instead, you’ll have to use them as a topping or grind them into powder.

Many argue that brewer’s yeast is the best substitute for nutritional yeast. And in terms of texture, they aren’t wrong.

The consistency and mouthfeel are spot-on.

Unfortunately, I don’t think it tastes the same. They’re both nutty and a little earthy, but I always get a faintly beer-like taste when I use brewer’s yeast.

For that reason, I’m not a huge fan and avoid it in recipes that call for more than a tablespoon of nooch.

When you only need a dash, though, it works okay.

You’ll need to do some kitchen converting, too. Use two teaspoons or less of brewer’s yeast for every tablespoon of nutritional yeast.

I know it sounds like an odd choice, but if you’re in a real pinch, try using soy sauce as a nutritional yeast substitute.

I may not be nutty or cheesy, but it’s found in almost every pantry and has that umami flavor in spades.

Just remember: you won’t need a lot of it. So, if a recipe calls for 1 tablespoon of nutritional yeast, you’ll only need half a tablespoon of soy sauce.

If you have it, white miso paste is even better than soy sauce.

It, too, has plenty of umami yumminess, and it’s even a little nutty. It’s not cheesy, but then, you can’t win them all, I guess.

You’ll only need a tiny amount of white miso. So, take the nutritional yeast amount and cut it in thirds.

Use 1 teaspoon of white miso paste if the recipe calls for one tablespoon of nutritional yeast.

Like brewer’s yeast, this one works best in recipes that need only a small amount of nutritional yeast.

Flavorwise, coconut aminos are a fantastic replacement for nutritional yeast. Especially if you need a vegan or dairy-free option.

However, coconut aminos are liquid, so you should only use them in liquid-based recipes. With that in mind, they work perfectly for soups, sauces, etc.

Furthermore, you’ll want to limit this for use in small quantities. Otherwise, your food will be too sweet and coconutty.

They’re cheesy and nutty, though they don’t have the same umami flavor profile.

Best of all, you can use them in any recipe with nutritional yeast – whether it’s a liquid or solid, it doesn’t matter.

Ground cashews work in everything.

There are no tricky conversions, either. Swap it out at a one-to-one ratio for nutritional yeast.

If you want to experiment, try blending cashews with coconut aminos or soy sauce to add that salty note we all love in nooch.

Vegemite and Marmite aren’t incredibly common in the US.

Still, both are decent substitutes if you live in the UK or Australia (or have some on hand).

Both products are made from brewer’s yeast with some extra stuff added in. And amazingly, both are pretty similar to nutritional yeast.

Though Marmite’s texture isn’t precisely right, so you should only use it in liquid recipes.

Use them in recipes that require only a small amount of nutritional yeast. You’ll use two teaspoons for every required tablespoon of yeast.

I don’t love vegetable broth as a nutritional yeast replacement. However, my friend swears it works well “if you’re really in a bind.” (Her words, not mine.)

My problem with vegetable broth is that the flavor isn’t the same. It’s salty and a little earthy, but that’s about as far as the similarities go.

Plus, you can only use it in liquid-based recipes.

As I said, it’s not my favorite. And you’ll need to start very slowly when substituting.

Try using only a fourth of the required amount. Otherwise, you’ll quickly overpower your dish.

Other Kitchen Substitutes To Keep On Hand

If you cook a lot of vegan recipes, you’ll need these nutritional yeast substitutes. Because without it, your food will be seriously lacking in flavor. 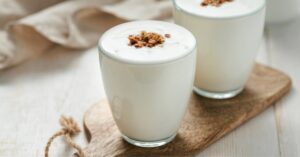