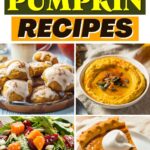 With these keto pumpkin recipes, you can still have treats without knocking yourself out of ketosis.

Although pumpkin isn’t strictly a fall food, that seems to be when people most enjoy it, and even if you’re on the keto diet, you might still crave it.

Whether you enjoy pumpkin in soups, pies, breads, pancakes, or something else, there should be a recipe on this list that suits your tastes.

All of them are keto-friendly (low-carb), but many are also Whole30-compliant, gluten- and dairy-free, and vegetarian- or vegan-friendly.

So no matter what your dietary restrictions are, give these 25 keto pumpkin recipes a look and see what you can find.

This gorgeous golden-orange soup is perfect for anyone looking for a quick lunch or light dinner. It’s thick and creamy, and you can have it ready in just 30 minutes with only eight ingredients.

Top it with sour cream and roasted pepitas for the complete flavor experience.

If pumpkin pie is your holiday dessert of choice, you shouldn’t have to give that up just because you’re cutting back on your carbs. With this recipe, you won’t have to.

The trick is to make it crustless and with plenty of coconut (milk, flour, and oil). It’s still just as velvety smooth and melt-in-your-mouth creamy, and the pumpkin flavor is just as strong.

You might miss the crust at first, but knowing you’ll get to enjoy a holiday staple with only 5 net carbs makes up for that pretty quickly.

You can serve these 35-minute pumpkin and chocolate bars for dessert or breakfast. They’re sweet enough for one but have enough protein for the other.

They’re rich and chocolatey, and they feature all your favorite fall spices (nutmeg, cinnamon, ginger, allspice, and more).

If pumpkin spice with a blast of chocolate is your thing, then you’ll adore these.

You can make this thick, chewy pumpkin fudge with fewer than 10 ingredients in less than half an hour, and there’s no cooking involved.

(You’ll have to nuke coconut oil in the microwave for about 30 seconds, but even the most inexperienced cooks can handle that.)

It’s sweet and just a touch salty. I won’t say it’s the perfect fudge, but I will say it’s hard to find any that tastes better.

Keto scones are not quite as crunchy as traditional scones, but that doesn’t mean they’re any less delicious and delightful to eat.

The phrase “fat bomb” may sound like a terrible idea, but that’s not the case for those on the keto diet. Keto eliminates carbs and turns fat into energy.

So while these soft, melt-in-your-mouth pumpkin pie treats might be high in fat, you can indulge without guilt, knowing they only have 1 net carb per serving.

Of course, if you prefer, you could call them energy balls instead of fat bombs, which is what they’ve done with this recipe.

These “energy balls” are keto and low-carb, vegan-friendly, paleo-compliant, and sugar-free. What more could you ask for in an energy-packed snack that tastes this good?

Plus, you can make them with no cooking in just 5 to 10 minutes, and all you’ll need is almond butter, pumpkin puree, pumpkin pie spice, coconut flour, and your preferred sweetener.

These are a great treat, even if you aren’t cutting carbs.

Keto pumpkin bread is the perfect combination of dense, moist, sweet and sweet. It takes about an hour to make, but it uses only seven ingredients (eight if you add chocolate chips).

Whether you want it for breakfast or a healthy dessert option, you’re sure to love it.

One of the things I love most about keto recipes is that they’ll usually only need a handful of ingredients. Take these fluffy keto pumpkin muffins, for example.

With this recipe, you can make homemade muffins – from scratch! – with fewer than 10 ingredients. And these particular muffins are light, fluffy, and just a bit crumbly.

Pro Tip: If you get too much coconut flavor from the coconut flour, you can cut down on it, or you can add just a smidge more vanilla, which will help balance out the tastes.

These pumpkin cream cheese donuts look insanely decadent, and thanks to the cream cheese and maple-cinnamon icing, they’ll taste that way, too.

Thankfully, they aren’t nearly as indulgent as they seem.

In fact, with only 2.3 net carbs and over 7 grams of protein per serving, they’re pretty nutritious, and you just can’t beat their spiced richness.

This multi-tiered treat is creamy, crunchy, and goes heavy on your favorite fall flavors. Give it a try, and you can thank me for it later.

I’ll admit that keto pumpkin pancakes aren’t as light and fluffy as pancakes made the traditional way.

However, what they’ll lack in fluffy lightness, they’ll make up for in flavor and heartiness. If you like pumpkin pie or pumpkin spice, you’ll love them.

They’ll have pumpkin pie spice through and through, plus, you can have them on the table in just 21 minutes—what a great way to start the day.

Pumpkin noatmeal is one of the few keto oatmeal recipes that I really, truly enjoy. It’s pretty much oatmeal in every way except for – you know – having oats in it.

The texture and consistency are the same as oatmeal, and it even tastes and smells as fantastic as “the real deal.” It’s so creamy, and the pecans add just enough crunch for contrast.

When it comes to keto breakfast favorites, this porridge isn’t bad either. It has a mild but delectable pumpkin and vanilla flavor, and it’s wonderfully thick and creamy.

It’s one of those recipes that you can’t really compare to anything else, but once you try it, you won’t want to enjoy breakfast without it for several days to come.

Why choose between pumpkin pie, cheesecake, and a milkshake when you can have all three of those things in one scrumptious package?

When it comes to pumpkin-themed treats, we can’t forget about the original pumpkin spice latte, or PSL – the drink so good, it has its own acronym.

This looks, smells, tastes, and even feels like the actual drink from Starbucks, making it a hard one not to love.

Keto pumpkin cheesecake masters all three of the big S’s: It’s sweet, soft, and smooth. And you’ll even make it with a crust!

The trick is finding the right ingredients, which this recipe has already done for you.

In all honesty, this cheesecake is so good, most people won’t even know they’re eating a keto-compliant dessert.

Let’s change gears for a minute and look at something a bit more savory.

Of course, it’s a salad, so you can add other ingredients if you want. Just remember that doing so will skew the nutrition facts listed on the recipe.

Finally, this is one that you can use on a myriad of different diets. It’s low-carb, keto-, and Atkins-friendly, and it’s also grain-, dairy-, and gluten-free.

You can also have it if you have diabetes or are on the Banting diet.

This pillowy soft, exceptionally creamy cheesecake mousse is sweet, spiced, and just a bit tangy from the cream cheese.

It’s simple to make, requiring only six ingredients and 15 minutes, and you won’t even have to cook anything. Make it at least an hour before you plan on serving it, though, as it needs to chill.

Here’s another excellent option for the salad lovers among us. This one is colorful and lovely, and it has a bright, zesty, entirely fresh taste that’ll really hit the spot.

You might as well make a big batch of the poppy seed yogurt dressing because you’ll want to use it on every salad you make.

You might not realize it, but pumpkin and chili go really well together. This rich, hearty chili has a warm, robust, and earthy flavor, and it’s perfect when the weather gets cool.

It contains everything you love about homemade chili – succulent chunks of turkey, plenty of herbs and spices, a few veggies, and a ton of protein.

And although you won’t taste the pumpkin outright, it adds a complexity to the overall taste that’s just out of the world.

This one is one of my all-time favorite chili recipes, whether I’m trying my hand at keto or not. It’s a little spicy, though, so be aware of that beforehand.

It’s similar to a cheese ball in color and ingredients, though its texture is much smoother.

(Hence the sweet and savory moniker.) And don’t forget the pomegranate seeds! They’ll add a bit of tanginess and a lovely splash of color.

Pumpkin hummus has a perfect consistency and a light, mild pumpkin taste with just a hint of spiciness. Serve it with a wide selection of veggies and watch as it disappears.

These soft, chewy pumpkin cookies will practically melt in your mouth, and the cream cheese frosting makes them just as rich as any “normal” cookie.

They might look, taste, and feel just like any carb-heavy cookie, but they certainly aren’t. In fact, each one has only 3 net carbs per serving. That’s a snack that anyone can enjoy guilt-free.

If you’re not familiar with the term “chaffle,” let me describe it instead: A chaffle consists of two super crispy pumpkin pie waffles with a rich, sweet cream cheese filling between them.

Spoiler alert: They are!!!!

Plus, you can make two of them in about 6 minutes flat, so these are a win-win all around.