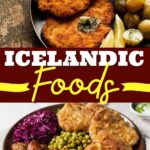 From pickled herring to a whole sheep’s head, these traditional Icelandic foods are sure to bring a bit of excitement to your next dinner party!

Because while Iceland may be a small country, it certainly packs a punch in the kitchen.

Nordic cuisine is all about fresh and simple ingredients, including seafood, lamb, pork, and wild game.

So if you want to try all of these Icelandic foods, you’ll just have to book a ticket and visit!

23 Traditional Dishes to Try in Iceland

So you’re ready to explore the culinary side of Iceland, huh?

Great! Here’s 23 delicious foods to try during your visit or to make at home if you’re feeling adventurous.

From traditional Icelandic soups and stews to sweet treats and drinks, there’s something for every craving.

You may have never heard of them, and you may not be able to pronounce them either.

Luckily, you can still enjoy them!

So what are you waiting for? Get ready to eat your way through one of the most stunning countries on the planet with these stunning Icelandic foods!

If you’re fortunate enough to visit Iceland, you’ve got to try one of these hot dogs.

Well, these babies are made of lamb and taste like something straight from culinary heaven.

Plus, they’re inexpensive, and you can find them practically everywhere.

But if you’re in Iceland, order your dog from the Bæjarins Beztu Pylsur food stand. Trust me; it makes all the difference.

Just like everyone else, Icelanders love their bread. And of all the varieties, rúgbrauð is probably the most beloved.

Before modern conveniences, people used to make it in wooden boxes.

They’d prepare the dough, then place it in the wooden casks. Then, they’d bury those casks near Iceland’s famous hot springs.

Today, most people bake the bread at home instead. But some places still do it the old way – and it’s a must-have if you visit.

However you make it, this terrific rye bread is sweet, dark brown, and crust-free.

Smother it with butter or jam, or eat it by itself. Either way, you’ll love it.

Also known as dried fish or hard fish, harðfiskur is a staple in Icelandic cuisine. People have been eating it since Ragnar Lodbrok was busy raiding Europe.

And yes, it’s just what it sounds like – dried fish. It tastes incredible with a pat of butter and some of that rye bread from above.

It’s also high in protein and low in fat, calories, and carbs. So it’ll keep you going on those long, cold Icelandic nights.

If you visit Iceland in the fall or winter, you’ll probably see plenty of restaurants selling kjötsúpa.

It’s a warm, hearty soup made with lamb meat, potatoes, and carrots.

The broth is thin, but the large chunks of succulent meat and veggies make up for that.

It’s a simple, easy-to-make soup that typically uses no more than five or six ingredients. And it’s easy to recreate at home!

Hangikjöt is thinly sliced smoked lamb. It, too, is an Icelandic staple, and you won’t find many households that don’t enjoy it.

The name literally translates to “hung meat,” which is how the lamb is prepared – hung and smoked.

People do all kinds of things with it – from making sandwiches to slapping it in stews.

One popular way to enjoy it is on Icelandic flatbread as a classic Nordic open-faced sandwich. And I’ve got a recipe for that coming up!

This hearty fish stew doesn’t really look like a stew, I know. In fact, I don’t really know how to describe it.

I guess I could say it resembles white breakfast gravy. However, it’s made with mashed potatoes, bechamel, and fish.

Whatever you call it, it’s thick and super hearty. If you like fish pie with cheese sauce and mash, you’ll love it.

These taste similar to any non-glazed donut you’ve ever tried. However, they have a fun, twisty shape that makes them unique.

They’re also crispy, which is strange at first bite. But you’ll quickly warm up to it when you reach the soft and doughy center.

You’ll flavor it with cardamom and nutmeg and coat it in powdered sugar once it’s ready.

They make a fabulous brunch addition!

Like any good fro-yo shop or Dairy Queen, you’ll pick your favorite flavor and then add three tasty toppings.

The server will mix it all together, and voila! Bragdarefur!

Hakarl is another Viking-age meal that’s still enjoyed in present-day Iceland. And it’s probably one of the country’s most popular foods.

The shark meat is fermented, giving it a very pungent smell and unique taste. Believe it or not, it can take several months to prepare.

Most Icelanders eat it with a shot of liquor. If you’re going to try it, I advise you to do the same.

Remember earlier when I said one of the most popular ways to eat smoked lamb was on a flatbread?

Flatkaka is homemade flatbread that resembles pita bread but is thinner. It’s a type of rye bread that tastes heavenly with butter or a cheese spread.

Wherever you go in the country, restaurants will be selling it. They bake it, butter it, sauté it with lemon, and more.

There are dozens of ways to order Atlantic cod in Iceland, and they’re all yummy.

This is probably the easiest and most accessible Icelandic food on the list. Skyr is a type of yogurt that’s ready-made and available in most grocery stores.

If you enjoy Greek yogurt, then you’ll love Skyr. It’s low-fat, low-calorie, and Icelanders have eaten it for over a thousand years.

People – even the Vikings – made it by skimming and fermenting milk with curds. Today, most people buy it at the local store instead.

It’s excellent for gut health, and you can add any toppings you’d use on yogurt.

Icelandic lobster, or humar, is another popular seafood dish in the country. Icelandic chefs use small lobsters and only cook their tails.

Despite their small size, the dish is often pretty expensive.

You can enjoy it baked, fried, grilled, sautéed, and more. Some people even order it on pizza or in soups.

Speaking of lobsters in soup, that’s precisely what humarsúpa is.

Creamy, brothy, and deliciously buttery, langoustine soup is something everyone will want seconds of.

It’s tomato-based with garlic, chives, onions, veggies, and lobsters in shells. It’s also a hearty soup that tastes amazing with rúgbrauð for dipping.

You’ll notice there’s no English translation for this Icelandic food.

That’s because, honestly, you might like this one more if I don’t tell you what it is.

Okay, I’ll let you know…it’s sour ram testicles. (See! I told you you’d like it better if I didn’t tell you!)

While this dish is no longer as popular as it once was, people still enjoy it occasionally.

It’s considered a delicacy spiced with herbs and made with whey or gelatin.

I don’t recommend making it yourself (where would you even start?), but if you’re in Iceland and it’s on the menu, why not give it a try?

Arctic char is another popular Icelandic fish, and most people describe its taste as somewhere between trout and salmon.

There’s no mistaking this for anything other than what it is.

To make it, chefs boil or smoke the entire head. So if you don’t mind an eyeless version of your food staring back at you, go for it.

As for myself, I’ve never been able to try it.

Remember the rúgbrauð from earlier? Icelanders really love it – so much so, they even turn it into ice cream!

You can make it with bread, milk, eggs, vanilla, and cinnamon.

It has a mild, gently sweet, spiced flavor and is very thick. To tweak the taste, you can add other ingredients, such as berries or other fruits.

I’ve never had it, but I tried a similar treat in Tallinn, Estonia. It had black bread and berries swirled through vanilla ice cream, and it was delish!

Brennivín is a traditional Icelandic liquor – some even call it Iceland’s signature liquor.

This is the spirit most people knock back when enjoying the fermented shark above.

Although the name pönnukökur may sound exotic, the dish isn’t. Pönnukökur are Icelandic pancakes, plain and simple.

They’re more like French crepes and can be enjoyed for breakfast, lunch, dinner, or dessert.

You can eat them with syrup, jam, whipped cream, or any other topping you like.

It’s a handcrafted, single-malt made from barley and aged for three years.

There are several varieties, and they all taste phenomenal – if you’re a fan of whiskey, that is.

*Note: Hrafna-Flóki Vilgerðarsson was the first Viking to sail to Iceland intentionally. The character Floki in the TV show Vikings is loosely based on him.

Marinated herring, or sild, is a pickled herring dish famous in Iceland and across Scandinavia.

Think of it as something like canned sardines. It’s salty, fishy, and often enjoyed with dark rye bread.

Primarily, people buy it. However, some Icelanders make their own using the following ingredients:

Store-bought or homemade, it’s a briny dish, to be sure.

They’re intensely flavorful drinks similar to the more popular (in the U.S.) Jägermeister.

Still, visit Iceland over the age of 20, and ask for Opal. Chances are, you’ll get the drink, not the candy.

23 Popular Icelandic Foods You Have To Try

From pickled herring to a whole sheep’s head, these unique and traditional Icelandic foods are sure to bring a bit of excitement to your next dinner party!