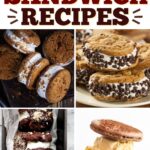 In fact, there are so many here, you might have a hard time deciding where to start.

I think the s’mores dessert would be ideal for camping enthusiasts. But the Reese’s ice cream treat is a must-make for us candy bar addicts.

Whichever of these ice cream sandwich recipes you choose, you won’t be disappointed – and no one will judge you for trying two or three at a time 😉

Want to know how to make hot, soft, dripping-with-glaze donuts even more delicious? Cut them in half and fill them with cold, creamy vanilla ice cream.

But that’s not quite decadent enough if you ask me. So, I suggest adding a drizzle of berry, chocolate, or caramel sauce.

And if you really want to impress your family and friends, why not make one of these no-churn ice cream recipes?

These aren’t nearly as easy to make as the donut recipe above – and they require some actual baking. But the rich fudginess of brownies complement the ice cream centers flawlessly.

But ice cream is the better option when you’re camping beneath the warm summer sky.

Luckily, that doesn’t mean you can’t still have all the same unique flavors.

These s’mores bars are made with yummy layers of Graham Crackers, milk chocolate frosting, marshmallow cream, and ice cream.

If that’s not summer perfection, I don’t know what is.

They take a bit of time and effort, but they’re well worth it.

They’re rich, though, so take it slow.

If you thought red velvet desserts were all about cupcakes, prepare to have your mind blown!

It doesn’t get much more patriotic than these red, white, and blue, star-shaped ice cream sandwiches.

Believe it or not, it shouldn’t take longer than 20 minutes to make a dozen.

These Oreo ice cream sandwiches are insanely good, and you won’t believe how easy they are to make.

Simply scrape out the Oreo’s centers and refill them with vanilla ice cream. The hardest part is keeping yourself from licking off the filling instead of scraping it.

Of course, if you’re making them just for you, why mess up a knife?

These simple, no-bake desserts are an excellent option if you want something fun and unique but don’t want to put in a lot of work.

Cut them in half, stick them on popsicle sticks, then dip them in melted baking chips. Finally, decorate with colorful sprinkles or chocolate chips.

People will love how fantastic they look, and they might even think you slaved away for hours. I won’t tell if you don’t!

If you’re a key lime dessert lover, this recipe is a must-try!

These may not look as fancy as some of the other options on the list, but they’re full of bright and tangy citrus flavor.

Plus, the Graham Crackers are crunchy and lightly sweet, while the centers are creamy and indulgent.

This churro ice cream sandwich is similar to the donut one at the top, but it’s crunchier with more cinnamon goodness.

You’ll also make the churros from scratch here, making them so much better.

If you’ve never made churros before, don’t panic – it’s pretty easy. The most intimidating part will be deep-frying them, which you’ll get used to after the first couple.

These snickerdoodle sandwiches feature buttery, syrupy waffles, your favorite ice cream, and a dash of cinnamon.

Oh, and whatever toppings you want to pile on top!

They may not be healthy, but they sure do taste fantastic.

If you’re looking for something comforting and with the perfect balance of sweet and tang, these blueberry pie ice cream sandwiches are just the thing.

You’ll start by making blueberry hand pies. But instead of topping the hot, berry-filled pies with ice cream, you’ll slice them in half and put the ice cream in the middle.

They’re decadent and messy, but you’ll love every bite.

Sounds terrific, right? Well, that’s what you’ll get with this recipe.

And it’ll only take you 35 minutes to make them, so it’s pretty hard to beat.

If you’re looking for something fun, quick, and kid-approved, you can’t go wrong with Nutella.

I like to make these super soft Amish sugar cookies, but you can make any you prefer – or buy them from the store to save time!

Either way, with a smear of Nutella and a scoop of ice cream, they’ll be a sure-fire hit.

These green sandwiches may look a little strange, but they’re every matcha lover’s dream.

There’s matcha in the ice cream and in the macarons for a double-dose of green tea goodness.

These are lightly sweet and refreshing. Give them a try; you might like them more than you think.

If you enjoy matcha but don’t want to go overboard with it, use this recipe instead.

You’ll still get plenty of matcha flavoring in the cake, but the ice cream is plain vanilla.

The two go really well together, and it keeps the sandwiches from being overpowering.

Of course, if you’re more of a fan of mochi than matcha, then you’ll probably prefer this recipe.

They have a light, tropical flavor and an icy cold texture that’s chilling but unbelievably good.

It’s an absolute wallop of peanut butter flavor, and I just know you’ll devour more than one.

You’ll start with a row of ice cream sandwiches; then, you’ll cover those in fudge and add peanuts and caramel topping.

Next comes another layer of ice cream sandwiches, then more fudge.

Finish it off with Cool Whip, peanuts, plus caramel and chocolate syrup.

If you think that’s a sugar high waiting to happen, you’re right, but it’s also phenomenal.

These are cold, creamy, and overflowing with peanut butter cup flavor.

What more could you possibly need to know?!

If you’ve never made cinnamon rolls in a waffle maker, now’s the time to start. I’d never tried it myself until I found this recipe, and now I’m hooked.

They’re just as sweet and cinnamony, but they have a crispier texture that’s way more pleasing than standard cinnamon rolls.

Add some vanilla ice cream and a second cinnamon roll on top, then top the whole thing with a sticky glaze. Yummmmmmmmmy.

The ice cream is soft and sweet, and the cookies are even more tender.

If it weren’t for the crunchy M&Ms, they would practically melt in your mouth.

Here’s another example of an ice cream sandwich that may not look as colorful and fancy as the others on this list, but when it comes to taste, it blows most of them out of the water.

When you look at them, all you’ll see are simple, crunchy shortbread cookies with a vanilla and strawberry ice cream filling.

The taste is exquisite, though.

If you’ve ever had a cookie that was so soft and moist, you were at a loss for words, then you’ve probably had cake mix cookies.

They’re so light, flavorful, and, well…cake-like.

And you already know how good ice cream and cake taste together! So this is pretty much the same thing, only in a neater package.

These colorful, funfetti-filled, birthday cake ice cream sandwiches are unbelievably good. They may be even better if you prefer vanilla to chocolate.

They take only 20 minutes to make (though you’ll need to let them freeze a while before serving), and they make a lovely addition to any birthday party.

They’re crumbly, creamy, and have a lightly sweet and seriously nutty flavor that no one can believe is “healthy.”

Plus, they have a fantastic texture; you’ll be amazed at how smooth the ice cream is.

These are so stunningly beautiful that I’d make them even if they tasted bland. Luckily, though, they taste incredible.

However, they are super sweet, so if you’re serving them for a child’s party, be sure you monitor how many everyone is getting.

But if it’s just for the adults, let them run wild!

These unassuming brown sandwiches may look a bit plain (especially following the galaxy ones above), but what they lack in appearance, they make up for in flavor.

If you’re someone who enjoys the juxtaposition of salty sweets, this is the icy cold treat for you.

With tender chocolate mint cookies and a creamy mint chocolate chip filling, these double mint chip ice cream sandwiches are some of my favorites.

These may look like Ding Dongs – and the chocolate cake does taste similar – but the coconut ice cream adds a different flavor profile.

Don’t be surprised if you get some serious pina colada vibes while enjoying one of these homemade confections.

Speaking of tropical, it doesn’t get more island fantastic than vanilla ice cream squeezed between two grilled pineapples and covered in toasted coconut.

If you’re in the mood for a luau or just want to try something a bit more unique, give these a try. They use only three ingredients and take just a hair over 10 minutes to make.

Plus, they’re ideal for those wanting something gluten-free. And if you make one of these dairy-free ice cream recipes, this can even be vegan-friendly.