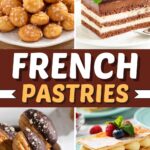 It’s no question that France is home to some of the most scrumptious desserts in the world.

In fact, from flaky croissants and buttery brioche to decadent eclairs and delicate macarons, French pastries are well and truly in a class of their own.

I have a severe sweet tooth, which means I’ve tried a lot of pastries and desserts in my life.

And while many European countries excel in dessert making (hello, Italian cannolis!), I’ve never been more in heaven than my time spent in Paris.

Seriously, French pastries are just so special. One bite, and you’ll see just what I mean.

Pastry sugar puffs, known as chouquettes (‘shoo-ket’), are French delicacies that can be served for breakfast or enjoyed as a snack.

Made with choux pastry, they’re generously coated with powdered sugar and have a chewy, salty-sweet finish I think you’ll love.

These French delights are enjoyable by themselves and pair perfectly with warm, melted chocolate for an extra special treat.

An opera cake is a sophisticated French dessert made of several different layers.

The most important layer is the cake itself – a soft and slightly chewy almond sponge soaked in dreamy coffee syrup.

Typically, there are three layers of the thin sponge with coffee buttercream sandwiched in the middle.

It’s then topped with more buttercream and dark chocolate ganache. Finally, it’s enrobed in a thin layer of chocolate glaze, giving it a glossy finish.

Mille feuille (‘mil-foy’) features thin layers of puff pastry with a filling in between.

Pastry cream (vanilla or chocolate custard) is the most common, but there are many other possibilities, including whipped cream and diplomat cream (whipped cream mixed with pastry cream).

The pastry is topped with a glaze, usually made from confectioners’ sugar and water.

Fun fact: while mille feuille is often associated with France, it is actually believed to have originated in Italy during the Renaissance.

You’ll need puff pastry (ready-made is fine), sugar, and cinnamon. Mix the cinnamon and sugar, then roll it up in the pastry. How easy is that?

These cookies are crispy on the outside and light and airy on the inside.

And while that heart shape is a signature, it’s not essential. So feel free to make pinwheels if that’s easier.

Light, buttery, and sweet are the best words to describe madeleines.

These shell-shaped French cakes are a dessert staple. And with their melt-in-your-mouth texture and golden exteriors, they please any type of palate.

Madeleines pair delightfully with a hot cup of coffee or tea but can also be eaten on their own as a delicious snack.

Pain au chocolat is probably one of the most well-known French pastries – just behind the croissant.

It’s a simple roll made with the same laminated dough (thin layers of pastry and butter). Only this version has a small stick of dark chocolate in the middle.

The chocolate melts during baking, creating a decadent, gooey filling.

Pain au chocolat can be found in most bakeries in France, and they’re often eaten for breakfast or as a snack.

Full disclosure: making croissant dough from scratch is time-consuming. As in – days!

First, you’ll make the dough and then let it rest (it contains yeast, so this is essential). Then it goes in the fridge or freezer, preferably overnight.

You’ll roll it out the next day and roll/fold in the butter. This is the first “turn,” and it must go in the fridge or freezer again.

From there, it needs two more “turns” which involve rolling the dough and folding it over to create the layers.

That goes back in the fridge overnight, and then you’ll roll, cut, and shape the croissants.

But you’re still not done. The croissants need to rise – which can take a while. Once they’re doubled, bake and enjoy!

Are they challenging to make at home? Yes.

Are they worth it? Absolutely.

These light and airy treats are often super colorful, with the cookies and filling standing out in a glass display case.

Made with almond flour, sugar, and egg whites, they can be filled with any number of delicious things, including jams, pastes, and frosting.

And just like croissants, they’re kind of a pain to make. But once you get the hang of it, you’ll make them for every party from then on.

Again, they’re well worth the effort and make stunning gifts too.

French breakfast puffs are like a cross between a muffin, a profiterole, a donut, and a churro bite.

These unique treats have a soft texture inside with a lightly crisp outer texture.

And they’re rolled in cinnamon sugar, giving them an added layer of warm crunch.

These delectable morsels pair well with a hot cup of coffee or a creamy yogurt for a hearty morning treat.

Gougères (‘goo-zhair’) are a savory French pastry of choux dough folded with cheese.

If you’ve never made choux before, don’t worry! It’s a cinch!

Just bring water and butter to a rolling boil (like in a kettle), then dump all the flour right into the pot.

Give it a good mix with a wooden spoon, let it cool slightly, then mix in the eggs. That’s a basic choux recipe.

For this version, you’ll add cheese too, and Gruyère is the best and most common choice.

Bake until golden and enjoy fresh from the oven.

Unlike their American counterparts, French beignets (‘ben-yay’) are round, not square. But they’re just as soft and pillowy as any you’d find in Café Du Monde.

And these unique donuts are so yummy, there’s no need for fillings or decadent frostings.

Instead, give them a generous dusting of powdered sugar. Yum!

French cruller doughnuts are rings of fried dough coated in a sweet glaze.

The dough is made from choux pastry – the same one used to make cream puffs and chouquettes.

It’s piped into long strips and fried, resulting in a light and airy doughnut with a crisp exterior.

They’re often served with a cup of coffee or tea, and they make a delicious breakfast or snack.

Here’s another classic choux pastry I know you’ve tried before.

The chocolate éclair is a quintessential dessert of French cuisine. And it’s just as versatile as any macaron.

Traditionally filled with pastry cream and topped with ganache, it’s about as perfect as dessert can get.

But it’s also morphed into an icon of the pastry world. You’ll find it all over the world with colorful glazes and scrumptious fillings.

And trust me when I say you’ll want to try them all!

Crème brûlée (‘crem-broo-lay’) is an exquisite dessert that’s not nearly as complicated as you might think.

It’s simply a layer of thick pastry cream or custard with caramelized sugar on top.

The only thing “chefy” about it is that you need a chef’s torch to brûlée the top. Without it, you won’t get that signature crack!

Better yet, it only requires a few simple ingredients, such as egg yolks, sugar, and milk.

Why make plain old crêpes when you can make a whole crêpe cake?

Between the layers of lightly sweet pancakes and the whipped cream, it’s light but super satisfying.

Plus, you’ll top it off with chocolate ganache for a punch of rich bitterness to balance it all out.

It’s a popular dessert in France, and it’s not hard to see why!

If you want to go all out, try adding color to the cream. It’ll take more time, but the rainbow at the end is more than worth it.

Baked in special molds lined with beeswax, canelé (‘can-a-lay’) is a popular French pastry that originated in Bordeaux, France.

When removed from the molds, they take the shape of a cylinder.

And thanks to the beeswax, they have beautifully caramelized crusts and a tender, custard-like interior.

They truly are quite spectacular.

As you can imagine, baking canelés can be pretty tricky. But with practice and patience, you’ll soon get there!

They come in various flavors, such as almond, hazelnut, and pistachio.

And while teacakes can be eaten at any time of day, they’re often enjoyed in the morning with a cup of coffee or tea.

Financiers not only taste delicious, but they also have a symbolic meaning in France. The teacake’s shape pays homage to gold bars, meaning prosperity.

Brioche bread is known for its deliciously soft and slightly sweet taste. It has a golden, buttery crust surrounding a light and fluffy center.

The flavor is due to the added butter, making it a type of enriched dough. Though it’s easy to make with the right recipe.

This type of bread is so beloved in France that some even adore it more than croissants!

Topped with a creamy white sauce, it’s become popular all over the world for its crunchy, flaky crust and rich filling.

A real party pleaser, Bouchée à la Reine can be served as an appetizer or a main course.

Like the eclairs and the cruller, this is another choux-based pastry. So expect a light and airy treat with a slightly crisp edge.

But where eclairs only typically have a small amount of cream in the middle, the Paris-Brest is almost overflowing with it!

Oh, and it’s not complete without the flaked almonds on top!

Kouign-Amann (‘queen-ah-mahn’) is a type of laminted dough, which is quite similar to croissant dough.

In fact, the dough itself, and the majority of the work, are identical – so if you double the recipe, you’ll get two treats!

The key difference is that you’ll incorporate sugar in the last turn. So when you roll it out and fold it for the final time, you’ll roll sugar into the dough too.

As it bakes, that sugar caramelizes, leaving you with an impossibly rich, sweet, and crispy treat.

Pain d’epices (‘pan-day-peace’) is a traditional sweet bread made from flour, honey, and spices.

It has a characteristic dense texture and a sweet yet savory flavor, similar to gingerbread cake.

It makes a great accompaniment to cheese platters or even more savory dishes such as roast pork.

French Rum Baba is a cylindrical cake traditionally made with brioche dough.

The dough is marinated overnight in spiced rum syrup to give it an incredible flavor.

This syrup is usually further enhanced with orange or lemon zest, which gives the cake a unique taste.

Its distinct blend of flavors will tickle your taste buds with just one bite.

From flaky croissants and buttery brioche to decadent eclairs and delicate macarons, French pastries are well and truly in a class of their own.