Skip to content
Home › Foods › 30+ Foods That Start With K 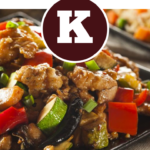 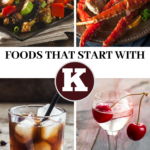 Take a second to think about foods that start with the letter K. Some of the best things start with K – Kabobs, Kettle Corn, and Key Lime Pie!

But others are not as common – like Kaffir lime, Kasha, Kedgreree, and Kumquat.

Today, I will introduce you to 30 different foods that start with a “K”. Whether you plan to join a game show, want to learn about cuisines from other parts of the world, or just keen to impress your friends with your extensive knowledge about food, this article is for you.

Here are 31 different foods that start with the letter K.

30+ Foods That Start With The Letter K

Kabobs are those ridiculously tasty meat cubes and roasted veggies skewered on a wooden or metal stick. It’s a traditional Middle Eastern dish, but it is popular all over the world.

Kaffir lime is a citrus fruit indigenous to Southeast Asian countries. Both its leaves and fruits are used to make essential oils, but it’s the leaves that are most commonly used in Asian cooking to enhance fragrance.

This Mexican liqueur is perhaps the most popular coffee-based drink. It is a combination of arabica coffee, rum, and sugar, and I love it.

Kale is one of the most nutrient-dense foods on the planet. It’s loaded with powerful antioxidants, Vitamin A, K, B6, C, potassium and manganese.

For a superstar meal that’s packed with nutrition, grab some kale and throw in some apple slices, cranberries, and chopped pecans.

Drizzle with honey mustard and you’ve got a crisp, crunchy salad that is sure to delight.

This type of grain is popular in Eastern Europe. The buckwheat grains are toasted to make cereal or porridge.

The word “kava” derives from the Polynesian word “awa” which means “bitter.” Also called kava kava, it is a popular social drink in the Pacific islands.

This sweet soy sauce is a popular condiment from Indonesia. It is made by fermenting soybeans, roasted grain, salt, a type of mold, and palm sugar.

The addition of the sugar gives it that dark color and a thick, molasses-like consistency.

It originated in India as a simple dish of rice and lentils. But started gaining popularity in Britian, where the hard-boiled eggs and rich cream sauce were added.

It’s considered a breakfast dish, but can also be enjoyed for lunch or dinner.

Okay, I know I promised you exotic foreign foods, but you can’t have a list of foods starting with K without mentioning ketchup, can you?

I’m sure you already know everything about this sweet and tangy condiment, so here’s an interesting fact: back in the day, the primary ingredients of ketchup used to be kidney beans, anchovies, walnuts, and mushrooms.

Also known as the Ceylon gooseberry, a ketembilla is a berry indigenous to Sri Lanka and Southern India. Just like other berries, the ketembilla is juicy and has a combination of sweet and acidic flavors.

It may be eaten fresh or used to make jams, jellies, and preserves.

The popcorn is seasoned with sugar, salt, and oil, giving it that combination of sweet and salty flavors that I love oh so much.

The term kettle is derived from the traditional vessel for making it – cast iron kettles.

Who would have thought that combining key lime juice, condensed milk, and egg yolks would make such a fabulous dessert? Whoever came up with the idea, you have my utmost respect.

These popular beans may be nutritious, but beware! Never ever eat them raw, because these red beans are toxic!

In Poland, the word “kielbasa” means any type of sausage. But here, we usually refer to it as a Polish sausage that’s flavored with garlic.

This Korean staple is made with fermented cabbage and Korean radish. It’s got such a distinct spicy and tangy flavor, and I admit to not liking it initially. But after giving it a few tries, I have now become kimchi-dependent.

This humongous crustacean is undoubtedly delicious, but you know what else is impressive about it? While it is a solitary creature, when threatened, thousands of king crabs form a towering pile to intimidate their prey.

Also known as the king mackerel, this fleshy fish makes a delicious alternative to tuna and salmon. This large and fatty seafood tastes great when grilled, poached, or broiled.

Unlike the kingfish, kipper is a much smaller fish. The fish is split in butterfly fashion and smoked to give it flavor. What it lacks in size, it makes up for in flavor.

This brandy may be colorless, but it can pack a punch! Just because it’s made with cherries doesn’t mean it’s sweet though.

Rather, it has a refined flavor with notes of cherry and almond.

Sticks of crisp wafers covered in rich and decadent chocolate – you can’t get much better than that.

I love Kit Kat so much that I try to find unique flavors whenever I travel. Among my favorites are green tea, cookies and cream, and wasabi.

Oh, how I love this sweet and tangy fruit! Here’s a fun fact: while kiwi is more commonly linked to Australia and New Zealand, it originated in China. In fact, kiwi is also called the Chinese gooseberry!

Yup, kiwi and kiwiberries are two different things. While they do belong to the same genus, the kiwiberry is much smaller and sweeter than its more popular cousin. Also, it doesn’t have that hairy skin, which allows you to eat it unpeeled.

Pronounced as kuh-nish, this savory dumpling is a staple in Jewish cuisine. It’s made with a pastry dough stuffed with a meat and potato filling and is then baked or deep-fried.

Kohlrabi is a German turnip that falls under the same species as Brussels sprouts, cabbage, and collard greens. They may be eaten raw or cooked, and taste similar to broccoli stems, albeit a tad sweeter.

Side note: I was surprised that my 6-year-old niece knows what this word means (and I didn’t). Apparently, it’s in her book of alphabets!

The name may be a little deceiving, because kosher pickles are not prepared following the Jewish diet. Rather, these pickles are made in Jewish New York City fashion – infused with lots of garlic and dill.

This one’s a mouthful! Koshihikari rice is a type of Japanese short-grain rice.

Because of its moist and sticky texture and mildly sweet flavor, it is the most ideal rice to make sushi.

Also known as the Japanese arrowroot, kudzu is a plant used to make starch. The starch is then used for a variety of dishes and natural medicine.

I bet you’ll be surprised to find out that this strange word is just another term for sweet potato! Sweet potatoes are called kumera in New Zealand.

This tasty orange-like fruit is popular in Southeast Asia. While it tastes like an orange, it’s a lot smaller (like an olive) and is shaped like an oval.

This stir-fry dish is a staple in Chinese cuisine. It’s made with cubes of chicken, peanuts, veggies, and chili peppers.

Its distinct sweet flavor is thanks to a combination of hoisin sauce, Chinese black vinegar, soy sauce, and Chinese Shaoxing wine.

Ending this list is a Russian beverage made from fermented rye bread. Kvass has a nice sour and refreshing flavor similar to beer, but without the alcohol.

30+ Foods That Start With K