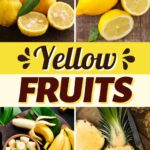 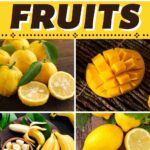 When you think of yellow fruits, you probably picture bananas. Don’t worry, you aren’t alone.

That’s the yellow fruit that most people would name if asked to do so.

However, plenty of other non-banana yellow fruits are out there, and they have many uses.

First, yellow fruits are a great way to brighten your kitchen!

They’re also perfect for tantalizing your taste buds. Are you fighting off a winter cold? Looking for a flavorful snack?

Or do you just want some color in your meals?

Either way, yellow fruits have you covered. Let’s look at a few of my favorites.

Yellow fruits come packed with vitamins and minerals and are a healthy addition to any diet.

And there are plenty of them from which to choose.

Bananas, pineapples, papayas, lemons, and yellow apples are the most common.

You can typically find those any time of year. Some of the others on this list may be harder to track down.

Still, here are 27 yellow fruits to experiment with in the future.

Bananas are a household staple. They’re long, yellow, and have slippery peels, at least according to cartoons.

Chances are you’ve eaten a banana, or 3,000, in your lifetime. But there’s always time for enjoying more.

You may have seen brown Barhi dates in the store. However, they’re a gorgeous, vibrant yellow before they fully ripen.

You should wait until they’re wholly ripe to eat them, though.

When you do, they’re soft, chewy, and have a sweet, almost butterscotch-like taste.

Most scientists believe the Buddha’s hand is one of the original four citrus fruits.

These are the four citrons from which all other citrus developed.

It has a delightfully floral, lemony smell and mild, not-too-sweet-or-sour lemon peel flavor.

It works best in recipes and is rarely eaten by itself.

Yuzus look like rounder, lumpier lemons and taste similar to lemons, too.

They’re another citrus fruit that can be used as an easy substitute for lemons.

The outside of a golden kiwi is brown, just like its green counterpart.

However, the inside is a vibrant, sunshine yellow. Its taste is similar to a green kiwi but is brighter and slightly sweeter.

Papayas, or pawpaws, are tropical fruits you can now readily find in most grocery stores.

Depending on their level of ripeness, their outer skin may be dark green to pale yellow.

The flesh inside is orange-yellow. They’re sweet, slightly tangy, and have plenty of health benefits.

They result from selective breeding and have a ton of vitamin C and melatonin.

Their taste is pretty similar to that of their darker cousins.

Lemons are just as well-known yellow fruits as bananas.

While most people don’t eat them raw, plenty of people use them in recipes, cocktails, and drinks.

Originally from India, mangoes are now enjoyed by people worldwide.

There are dozens, no, hundreds, of different varieties ranging in color from green and yellow to red.

Many of the most commercially sought-after mangoes are yellow both inside and out.

Others feature brighter skin colors, but most are all some shade of yellow inside.

They’re a sweet and tangy tropical fruit that you can eat raw, cooked, or added to cocktails.

Perhaps the most popular type of yellow apple is the Golden Delicious. However, other varieties exist, including:

These are only a few of the numerous yellow varieties of apples.

Their taste and appearance, even their particular shade of yellow, vary widely. Most are super yummy, though!

Native to various parts of North America, yellow figs are packed with fiber and vitamin C.

People most often add them to jams, jellies, and desserts. However, you can also eat them by themselves.

Everyone is familiar with the green-shelled watermelons with pretty pink insides. However, yellow watermelons are also a thing.

From the outside, they look just like their pink counterparts. (Though many varieties are more round than oblong.)

On the inside, though, they are golden yellow with black seeds.

Some people say they’re sweeter than pink watermelons. I find the tastes to be pretty similar.

The outsides are more brownish-green, which makes people forget about them.

Their insides, however, are brilliantly yellow.

Whether they remember them or not, most people have eaten this tropical fruit.

What most don’t know is that pineapples are actually berries!

Though many pears are green, others range from pale to bright yellow. Most are sweet with a hint of tartness.

And all are full of potassium, fiber, vitamin C, and other essential nutrients.

Nectarines are a type of stone fruit similar to peaches and pears.

In fact, they look a lot like peaches, though peaches are typically a bit larger.

They have fuzzy orangish-pink skin and yellow flesh inside. They’re sweet, juicy, and super sticky.

Of course, if you’re under 12, that just makes them more fun.

Peaches and nectarines have much in common.

They look alike, smell alike, and even taste quite a bit alike. If you like one, you’re almost sure to like the other.

They’re often smaller than grapes and have an otherworldly, almost transparent appearance.

They look like yellow-tinted water balloons in a particular light.

You can eat the fruit raw, but most people don’t. (Sometimes, you’ll get an extremely sour one if you try!)

Instead, most people use them in dessert recipes, jams, or jellies.

Most people think of cantaloupe flesh as more orange than yellow.

Still, some of the lighter meat has a somewhat yellow hue. Their outsides are also a tannish-yellow color.

Cantaloupes are a type of melon similar to honeydew. They have a sweet but not too sweet flavor and are very juicy.

Similar to peaches and plums, apricots are a round, yellow fruit.

They’re a phenomenal source of potassium and have plenty of vitamin C.

You can eat them raw, cooked, dried, or even frozen.

You can also use them to make pies, tarts, and other delicious, fruity desserts.

Contrary to the nutritious fruit, the seeds are pretty toxic. Be sure to remove them before biting into this fleshy fruit.

There are many different persimmon varieties. Most range in color from orange to red.

However, a few types are yellow. These include the American persimmon, cinnamon persimmon, and maru.

Of the orange varieties, some have yellow insides, as well.

Some persimmons are slightly sweet, while others are incredibly bitter and astringent.

Additionally, the level of sweetness sometimes depends on the fruit’s level of ripeness.

Starfruit is hands down, my favorite fruit.

Don’t get me wrong, I love berries, melons, apples, bananas, and all the rest. But nothing beats a starfruit for me.

It could be because they were so hard to find for so long.

I always wanted to try one, but they never would come to my region.

Then, I finally found one on vacation, and the heavens opened up, and the angels sang.

Okay, that’s not strictly true, but the fruit was divine.

It’s gorgeous, for one thing. When you slice it, each piece looks like a small star.

They’re also juicy and have a perfect balance between sweetness and tartness.

They’re also ideal for decorating. Slice them up, and you’ve got instant stars to put on cakes, pies, or anything else.

They look great as cocktail garnishes, too.

And luckily, they appear in supermarkets a lot more often these days.

It’s hard to believe by looking at it, but the loquat is related to the rose.

It’s native to Asia, and all parts of the plant are utilized in Chinese medicine.

Some people peel it and eat it raw. It’s also a popular ingredient in herbal teas, extracts, and other things.

It’s packed with antioxidants and may help fight cancer and heart disease.

It’s a tasty fruit with an interesting flavor and usually grows in clusters.

Though this Peruvian produce is technically a fruit, it tastes more like a sweet potato.

It has a mild, pleasant flavor that’s neither too sweet nor too anything else.

The fruit is incredibly good for you. It has high amounts of iron, protein, calcium, fiber, healthy antioxidants, and more!

Unfortunately, it’s hard to find outside of South America.

People primarily encounter it in powdered form in supplements in the U.S. and Europe.

In its raw form, it ranges from bright green to yellow-orange.

Also known as a pomelit, the oroblanco is a juicy citrus fruit.

It’s about the size of a grapefruit but is colored more like a lemon.

It’s a cross between a pomelo and a grapefruit and tastes bright and citrusy.

It’s sweet and seedless, and its name translates to ‘white gold.’

I know what you’re thinking. Passion fruits are purplish-red, not yellow!

On the outside, that’s true, but their insides are translucent yellow-gold.

The fruit both smells and tastes terrific and has crunchy seeds that you can also eat.

There’s also a yellow passionfruit that is yellow inside and out.

Ah, the durian. Also known as the stinkiest of super stinky fruits. That’s a joke, of course.

But some call it “the king of fruits,” which is more regal than it smells.

If that doesn’t make you want to try it, I don’t know what will!

All jokes aside, durians taste great. They’re somewhat custardy and can work in both sweet and savory recipes.

They’re also good for you, which makes up for the terrible smell. (Maybe?)

Like starfruit, eggfruit is another gorgeous piece of fruit. It has a rich, warm yellow color and an exciting variety of shapes.

(Some are round. Others are somewhat heart-shaped or curvy and oblong.)

It’s a tropical fruit most often found in Mexico.

You can eat it raw or turn it into puddings, purees, and other delectable desserts.

It tastes rich, sweet, and somewhat earthy, nothing like an egg.

This list of yellow fruits goes way beyond bananas! From kiwi to papaya to lemons, learn about all of the different types.