Skip to content
Home › Beverages › What Are Bitters? (+ Drink Recipes) 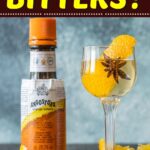 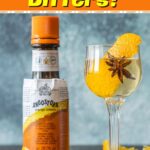 If you’ve ever stopped and wondered, “what are bitters?” you aren’t alone!

Unless you’re a seasoned bartender, you might not know what to do with them.

In case you’re curious, I’m about to answer the following questions as well.

I’ll also cover the different types of bitters, including Angostura, Peychaud’s, and orange.

In other words, if you have a bitters-related question, hang around.

I’ll cover everything I know about these delightful drink additions.

I’ll even give you 10 recipes using bitters at the end. Keep reading to learn more!

So, what are bitters? Most people know they’re something you add to cocktails.

But beyond that, their definition gets a little fuzzy.

Do they taste bitter? Is that how they get their name? Are they, themselves, alcoholic?

Bitters are small bottles of alcoholic spirits made from high-proof liquor.

Companies make them with flavorless alcohol, herbs, plants, and other ingredients.

They contain alcohol (typically 35%-40% ABV). However, they’re sold as non-alcoholic beverages with no age restrictions.

Retailers can sell bitters this way because they aren’t for consumption.

Instead, most people use only a couple of drops to flavor cocktails. They’re flavorful, aromatic, and only sometimes bitter.

Before we used them for cocktails, bitters were common digestive aids. Many people still use them this way.

What Are Bitters Made Of?

The primary ingredient in bitters is some type of high-proof, flavorless alcohol. Vodka is a popular choice.

They’re then infused with flavorful herbs and spices, seeds, fruit, and other ingredients. Some recipes even use tree bark!

Here are some, but not nearly all, of the common ingredients used for making bitters:

Do Bitters Ever Go Bad?

It takes a really, really long time for bitters to “go bad.” Typically, you can keep opened bitters for 5 to 10 years without issue.

(Assuming you’ve stored them in a cool, dark area.)

And even when they “go bad,” they don’t really go bad. (Apologies for all the repetition!)

What I mean is bitters don’t spoil or ruin. Instead, their taste often changes after 5 to 10 years of being open.

While you could still use them without fear of them poisoning you, they wouldn’t taste the same.

Unopened bitters, on the other hand, can last practically forever.

How Much Alcohol Is in Bitters?

You might even wonder how companies can mark them as non-alcoholic. Simple.

Bitters are meant to be used only in small dashes. Most recipes require no more than eight drops, which is about 1/8 of a teaspoon.

Since you’ll use such a small amount, you won’t consume enough alcohol to notice. At least, not in the bitters. The cocktail is another story.

What Are Angostura Bitters?

Angostura bitters are the oldest brand of aromatic bitters.

Created in 1824 by a doctor, they were originally hoped to be a cure-all for many diseases.

They didn’t turn out to be successful.

However, they were a popular digestive aid for many decades. Today, people primarily use them in cocktails.

You also taste cloves and other spices in these fragrant bitters.

What Are Peychaud’s Bitters?

Unlike Angostura bitters, Peychaud’s bitters aren’t all that bitter.

Rather, they’re lighter, with both minty and floral notes.

They aren’t quite sweet but are closer to sweet than bitter.

Anise and nutmeg are two of the most predominant flavors in these bitters.

You find them in drinks like the Cocktail a la Louisiane and the Sazerac.

They take their name from their creator, apothecary Antoine Amedee Peychaud.

What Are Orange Bitters?

Orange bitters are, you guessed it, orange.

They have distinct citrus notes from the orange peel with which they are infused.

You also notice hints of anise, cinnamon, and coriander.

You’ll find them in plenty of fall cocktails, especially those that use apple cider as a base.

People also add them to martinis, negronis, and adonis with regularity.

Their taste is somewhat bittersweet and has undertones of burnt sugar.

Other Types of Bitters

The three bitters above are easily the most popular. However, other varieties include the following:

There are even some really strange options out there. (Like grapefruit and celery bitters!)

Now, let’s look at ten popular cocktails that use these various bitters.

It’s hard to beat this 1-minute, 4-ingredient cocktail for convenience.

As its name implies, the Bitter Giuseppe is a somewhat bitter drink.

Though, it’s not as bitter as you might think, even with the Cynar base.

Instead, the orange bitters and lemon juice give it a citrusy kick that helps sweeten it somewhat.

The sweet vermouth helps in that respect, as well.

It’s a low-alcohol drink that allows you to be festive without getting too intoxicated. As long as you don’t have too many, of course.

Ah, the zombie. Such a dark name for what’s ultimately a light, sweet, and beachy drink.

The combination of light, dark, and gold rum also gives it a potent kick.

It’s sweet but not too sweet, and the aromatic bitters give it a complex, well-spiced flavor.

Try it if you want something yummy to sip by the pool.

It’s hard to believe something with such a short ingredient list can have such a bold taste.

However, this drink is almost impossible to describe.

It’s crisp, bitter, and even a little harsh, though the simple syrup smooths its roughest edges.

It’s spicy, slightly minty, and unlike anything you’ve ever tried.

It’ll definitely warm your throat and belly, though. So maybe stick to it in the cooler months of the year.

Making a virgin drink can be more complicated than making a real cocktail. It’s hard to find that balance.

You want to keep it from being purely sweet and sugary.

But how do you replicate the more complex taste of an alcoholic drink without alcohol?

By adding a few dashes of bitters, of course!

Doing so will strike the perfect balance and give the slushy daiquiri just the zing it needs.

If you don’t tell people, they may not even realize it’s not “the real thing.”

Do you enjoy a good, stiff Manhattan? If so, you’ll probably appreciate the Rob Roy, as well.

It’s basically a Manhattan, only with Scotch whiskey instead of rye.

It still has the same crisp, boozy flavor, though. Seriously, if you like one, you’ll also enjoy the other.

You won’t notice much difference between them.

This smooth, slightly sweet drink is an easy one to love.

You combine gin, sweet vermouth, maraschino liqueur, and aromatic bitters to make it.

It’s not overly strong or boozy, and it’s perfect for those who don’t appreciate bold liquor tastes.

It’s an excellent choice if you want something classic and not too over-the-top.

I love everything about the pisco sour. It features the bright, citrusy, and tart notes of lemons or limes.

(This recipe uses limes, but you can substitute lemons if you prefer.)

Plus, it has a lovely frothy top that’s just plain fun to drink.

If you’re not a fan of overly sour drinks, don’t worry.

The aromatic bitters cut through some of the sharpest citrus notes. There’s just enough tang to notice.

Underneath that, you get a rich plethora of complex flavors.

There are very few rum-based drinks out there that I don’t appreciate.

Rum is just one of those liquors that taste great in anything. This rum punch is no exception.

It looks gorgeous and has a phenomenal sweet and fruity flavor.

And despite the Angostura bitters, this drink has no hint of bitterness.

You will get a complex flavor profile complete with warm spices, though.

Crisp, refreshing, and mega minty, the classic mojito is a hard drink to beat.

It’s perfect for any occasion, formal or informal, and it tastes great any time of day.

Want a brisk morning drink with a hint of sweetness for brunch? Try the mojito!

Whatever you’re in the mood for, a mojito is the answer. And adding the optional bitters enhances its overall yumminess.

That’s a level of incredible decadence to which we should all aspire. At least while we’re on vacation, anyway.

This bold, bittersweet drink uses both orange and chili bitters.

Paired with the espresso, rum, and simple syrup, they make for an exciting flavor combo.

There’s nothing else quite like this smoky, robust drink. Don’t believe me? Try it for yourself! You’ll quickly see what I mean.

What Are Bitters? (+ Drink Recipes)

If you’re wondering, what are bitters?, these recipes have you covered! Learn how to use bitters to make the tastiest boozy drinks. 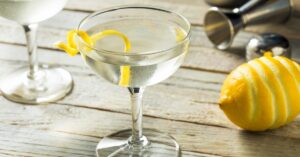