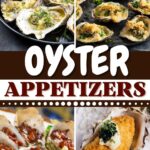 If you want to wow your guests with something fancy and delicious before an elegant meal or the big game, it’s hard to beat oyster appetizers.

They’re also incredibly versatile. You can enjoy them raw, baked, deep-fried, smoked, or wrapped up in bacon.

Oysters are also popular because they’ll deliver a nice amount of umami flavor but aren’t overly fishy, meaning even people who don’t like seafood sometimes enjoy them.

Now, without further ado, let’s get to this list of 10 outrageously awesome oyster appetizers.

One of the best things about oysters is that you won’t even have to cook them to enjoy them. Instead, they’re one of those wonderful things that taste just as good raw.

That means you can whip up this simple, flavorful appetizer in practically no time, and all it’ll take is a bit of mixing ingredients on your part.

You’ll use shallots, strawberries, fresh black pepper, and vinegar to make a sweet and tangy dressing that you’ll spoon over the raw oysters in their shell.

It gives them an unbeatable taste, a bright splash of color, and makes them look so refined and high-class that no one will know you pulled them together in just 10 minutes.

2. Raw Oysters on the Half Shell With Cucumber Mignonette

Of course, not everyone wants their seafood to have even a touch of strawberry sweetness. If that sounds like you or your guests, this recipe may better suit you.

The oysters are still raw and on their shells, but you’ll serve them with a mignonette that’s earthier and less sweet.

It contains cucumbers, ginger, rice wine vinegar, a shallot, a dash of sugar, and fresh pepper. You’ll also serve them alongside cocktail sauce for those who want something more traditional.

It might not require any cooking, but this dish gives your guests a great selection of flavors from which to choose.

Not everyone sees the appeal of raw oysters, but nearly all seafood lovers can appreciate deep-fried oysters with crispy cornmeal crusts.

These are so good that they won’t need any fancy dressings or garnishes to make you come back for seconds.

Even so, I recommend whipping up the homemade remoulade sauce for dipping. It’s creamy, zesty, and features a nice kick of heat from the Tabasco.

Whether you want it on top of crackers, fresh veggies, or a warm, chewy bagel, smoked oyster spread is the ultimate oyster appetizer that anyone can enjoy.

It’s thick and chunky, and it has so much flavor that you won’t believe it uses only four ingredients (cream cheese, smoked oysters, Worcestershire sauce, and cayenne).

Because everything is ready to go and there’s no cooking – or even cutting – involved, you can have it on the table in just 5 minutes.

If you want to add some color and even more umami flavor, dice some green onions or garlic and mix them with the other ingredients.

Just don’t overdo it; you don’t want to overpower the savory smokiness of the oysters.

Bring a bit of that famous New Orleans Cajun cooking into your home with this recipe for crispy, crunchy fried oysters.

You’ll coat each one in a mixture of buttermilk, flour, yellow cornmeal, Creole seasoning, and salt, and you’ll fry them in a quart of peanut oil.

It takes about 20 minutes to make enough for two people, and the Creole seasoning goes a long way towards making these taste just like they would if you were eating them on Bourbon Street.

If you’ve never had ceviche, now is as good a time as any to change that. Ceviche, or “seafood salsa,” as my niece calls it, is full of hearty chunks of yumminess and flavor.

You can spoon it up like soup if you like, but most people prefer to serve it with fried plantain chips, tortilla chips, or something else for dipping – the saltier, the better.

This easy baked oysters recipe is an excellent alternative if you want delectable oysters but aren’t in the mood for frying them.

It takes 25 minutes to prepare and cook them, and each oyster is perfectly seasoned with Creole seasoning and covered with parmesan and cheddar cheeses.

Sprinkle a bit of chopped parsley over them to give them some color and an earthier taste. You won’t be disappointed, and neither will your guests.

Oysters Rockefeller is a fancy name for baked oysters covered with a spinach and breadcrumb topping. You can have them ready in less than an hour, and you’ll only need nine ingredients.

These are delicious, but truthfully, you won’t get a ton of pure oyster flavor from them. Instead, you’ll primarily taste the butter, shallots, cheese, spinach, and lemon juice.

If you or your guests are new to the world of oyster appetizers, this would be a great one to ease in with; just understand that you’ll probably be hooked after a single bite.

These smoky oysters are incredible, and that’s thanks mainly to the delightful wine butter sauce you’ll make from scratch.

Each bite of these tender oysters is buttery, garlicky, earthy, and herby, and I’d almost bet that even the most anti-seafood people on the planet will enjoy them.

And if they don’t, that just means there are more left over for you, so it’s a win-win situation.

If I’ve said it once, I’ve said it a thousand times: Everything tastes better with bacon. As it turns out, oysters are no exception to that rule.

For this simple but insanely scrumptious recipe, you’ll need oysters, bacon, sugar, garlic, and soy sauce. The result is a salty, garlicky, umami-packed delicacy that no one will be able to turn down.