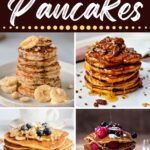 Are there such things as healthy pancakes?

They’re so carb-heavy, and we usually load them down with syrup, whipped cream, and other unhealthy things, so it seems like the answer would be no.

In truth, pancakes can be healthy, but you’ll just have to know how to select the right ingredients to make them that way.

Plus, you’ll have to lay off the sugar- and carb-heavy toppings.

I’m showcasing 25 of my favorite healthy pancakes recipes for this roundup.

These are pancakes that include fruit, whole wheat, nuts, and other nutritious ingredients.

Of course, that doesn’t mean they’re all low-carb. (Sorry, my keto people!)

Some of these still have a relatively high carb count, but they’re all packed with things that are good for you.

So before you decide to give up on pancakes altogether, try a few of these healthy pancakes first.

If you’re in the mood for something healthy, tasty, and convenient, check out this recipe for apple pancakes.

You can make them in no time by dumping everything in the blender.

Once you have it mixed, pour it into your pan and let them plump up into fat, fluffy pancakes.

That’s all it takes, and you shouldn’t need more than 20 minutes.

They’ll feature the bright flavor of fresh apples and lots of warm spices, making them a favorite on cool mornings.

These cinnamon applesauce pancakes are another tasty, apple- and spiced-based option, and somehow, they take even less time to whip up.

If you’re a fan of apples and fall spices, you’ll appreciate either of these first two recipes.

All you’ll need for these five-ingredient pancakes are bananas, eggs, rolled oats, baking powder, and salt.

They’re fluffy, sweeter than traditional pancakes, and have nine grams of protein!

Top them with syrup and fresh fruit for an extra decadent breakfast option.

Cool Whip, a dash of honey, and sliced bananas taste great, too.

On their own, whole wheat pancakes aren’t as sweet or as light and fluffy as regular pancakes, which turns many people off of them.

That’s where the pumpkin puree comes into play.

Although it doesn’t make them sweeter, it gives them that rich, warm pumpkin flavor.

Add some cinnamon, brown sugar, nutmeg, and other fall flavors, and you’ll have an absolute hit on your hands.

With this recipe, you’ll take “boring” whole wheat pancakes and turn them into a healthier version of pumpkin pie.

Most people associate Dutch babies with being over-the-top and indulgent.

You know, the exact opposite of healthy.

But this recipe is simple and nutritious, and it combines the light sweetness of the Dutch baby with the vibrant tanginess of blueberries.

Plus, you’ll also use cinnamon, maple syrup, and a cup of milk, so they’re nice and fluffy, too.

Honestly, these are so sweet and spongy that it’s hard for most people to believe they’re whole wheat pancakes at all.

Developing low-carb and keto-friendly recipes for pancakes is challenging, but it isn’t impossible.

Coconut flour pancakes, for example, have only eight net carbs per serving.

They’re pretty simple to make, too.

They aren’t quite as fluffy as traditional pancakes, but they’ll taste just as good, and you can pile them high with your favorite berries for a sweet topping.

When you think of pancakes, you probably imagine something sweet and dripping with syrup or honey.

However, pancakes can be tangy, especially if you make them with sour cream.

These fluffy, soft, and tangy pancakes are tasty enough on their own.

When you smother them with a peach and raspberry topping, though, they become practically unbeatable.

If you’re looking for a unique way to liven up your weekend brunch, these pancakes are the perfect thing.

Here’s another low-carb and keto-friendly pancake option that just happens to be paleo-compliant, as well. They’re denser and less airy than regular pancakes.

However, that also means they’re more filling and won’t leave you hungry again an hour or so after eating them.

They’ll have a mild, slightly nutty taste and only eight net carbs per serving.

Yep. You read that correctly. These pancakes use only two ingredients: cream cheese and eggs.

If you have a waffle maker and a blender, you can have them ready in 10 minutes or less.

The only complaint I have with these is that they’re a bit eggy.

I combated that with mine by adding some vanilla, maple syrup, and semi-sweet chocolate chips.

It made them a little less healthy, but they tasted fantastic.

The only bad thing about pancakes is that sometimes, they won’t fill you up the way more protein-heavy breakfasts would.

Wouldn’t it be nice to have the airy deliciousness of pancakes but the high protein count of something heartier? You can!

You’ll pack these pancakes with all kinds of things that are good for you – rolled oats, flax meal, chia seeds, and more.

If you’re someone who enjoys the feel of contrasting textures, you’ll love this recipe. The pancakes are buttermilk pancakes.

They’re soft, light, and fluffy, like all buttermilk pancakes.

However, you’ll also add fresh blueberries and granola into the batter, giving them a tangy crunch in every bite.

Not only are these yummy pear pancakes dairy-free, but they also contain no added sugars. They’re unbelievably simple to make, too.

You wouldn’t think a single pear would add all that much flavor, but it does.

You’ll get a nice dose of sweetly tart pears in every bite.

Blueberries and bananas are two of my favorite things, and when you combine them, it’s a combination that’s just out of this world.

These pancakes are rich, airy, and full of fruity yumminess. They taste so good, they won’t even need toppings, but you can add them anyway, of course.

Whole-grain pancakes might be a bit flatter and darker than other pancakes, but that doesn’t make them any less sweet, especially if you add enough sweet, bright toppings.

You can also make them sweeter by adding molasses, vanilla, maple syrup, milk, etc., to the batter.

They’re not exactly like buttermilk pancakes, but they’re still delicious.

When it comes to pancakes, the fluffier, the better, and these extra fluffy blueberry pancakes are about as thick as they come!

They aren’t as healthy as some of the other options (and they certainly aren’t low-carb or keto-friendly), but they have a ton of protein.

Plus, they’re chock full of stuff that’s good for you – blueberries, almonds, Greek yogurt, and more.

They might not fit into everyone’s dietary needs, but they’ll certainly help you start your day off right.

You’ll make these lovely golden-brown pancakes with quinoa, and you’ll get all the benefits that come from it.

There are also apples, cinnamon, and nutmeg for a rich, spiced flavor.

Like most pancakes on this list, these are easy to make. It shouldn’t take much longer than 15 minutes to make a dozen.

These six-ingredient vegan pancakes are yummy, have a great texture, and use such simple pantry staples that you could probably whip them up right now without a trip to the store.

You can mix everything in a single bowl and have them ready to eat in 10 minutes!

So what are you waiting for?! It’s vegan pancake time!

Sometimes it takes a few tries to find the perfect keto recipe for something that usually isn’t naturally keto-friendly.

If you’ve tried other keto and low-carb recipes for pancakes and didn’t enjoy them, don’t give up hope. This one has a secret ingredient.

With heavy cream, vanilla, and bacon folded into the batter, even the most hardcore pancake lover will appreciate this low-carb version of their favorite breakfast food.

Here’s more proof that pancakes don’t always have to be sweet. These zucchini pancakes (fritters, if you prefer) are so good.

They feature zucchini, onions, and chili peppers and have a phenomenal, somewhat earthy flavor.

Whether you want them for a meal or an appetizer, they’re delicious.

Not only will you make these super light and airy pancakes with Greek yogurt and whole wheat, but you’ll also get an incredible morning pick-me-up from the massive boost of protein.

Although you’ll make them with non-typical ingredients, no one who tries them will ever know.

In both taste and texture, they’re almost like buttermilk pancakes.

These thick, golden-brown pancakes are gluten-free, and you can easily make them dairy-free and vegan-friendly simply by making a few substitutions.

They’re sweet, delicious, and ready in 15 minutes. It’s pretty hard to beat that.

Lemon ricotta pancakes have a bright and zesty flavor and are ideal for brunch. They look great, smell incredible, and taste even better.

They take about half an hour to make, but once you top them with whipped cream and maple syrup, it will have all been worth it.

The edges get fantastically crispy – almost like waffles – and the centers stay warm, soft, and a little gooey. They are 100% drool-worthy.

The original author of this recipe refers to these dark brown pancakes as having a “humble appearance,” but I find their rich brown color quite lovely.

Whether you like the way they look or not, there’s no denying that they’ll taste incredible.

They’re naturally gluten-free and have a warm, nutty flavor that pairs well with most toppings.

Their texture is awesome, too. If it weren’t for the color, you’d have a hard time realizing they’re not your everyday pancakes.

Give breakfast a makeover with these healthy pancakes! From cinnamon applesauce to banana oat to whole wheat, these hearty breakfasts are nutritious and satisfying.