I’ve been experimenting with healthier, alternative flours and this is my latest creation. Coconut flour pancakes!

They’re light, fluffy, and they satisfy my sweet tooth while not putting me into a complete food coma.

I’m curious though, which do you like best: pancakes or waffles? Let me know in the comments. Seriously. Go now. Cast your vote and let me know. I’ll be here waiting for you.

You can whip up this tasty, gluten-free breakfast in just 30 minutes. But I must warn you – coconut flour is no ordinary beast. If you’re used to cooking with traditional flour, you’re in for a new adventure.

But I promise it’s worth it. Coconut flour is a much healthier alternative to traditional white flour.

The processing of white flour strips it of almost all of its nutritional content. Coconut flour, on the other hand, is gluten free, has fewer carbs, and is rich in fiber, protein, iron, manganese, and potassium.

However, you can’t just swap out coconut flour in place of white flour. Coconut flour is far more absorbent than white flour, which will soak up much more of the liquid in a recipe. Acting similar to a sponge.

This is why you’ll often see extra eggs and liquid ingredients when you’re baking with this alternative flour. The protein in the egg whites provides structure while the yolks provide moisture.

Quick Tip: To avoid any sort of gritty texture (or lumps), be sure to sift the flour thoroughly before you bake with it. If you don’t have a sifter, pour flour
into a fine-mesh sieve and gently shake over the bowl.

Coconut flour can be tricky. Especially when you’re used to cooking with traditional, white flour. But the extra effort is well worth it. Coconut flour is a much healthier alternative.

Here are some quick tips for cooking with coconut flour.

Traditional white flour is pretty much tasteless. Which makes it work for just about anything. Coconut flour (on the other hand) hasn’t been processed and still retains many of its natural flavors (and nutrients).

Coconut flour is a wonderful gluten-free option. And tasty as well 🙂

You can use it in all sorts of baked goods.

Can you freeze coconut flour pancakes?

You sure can! Just be sure to freeze them in a single layer before putting them into a freezer bag. Or… you can stack them as long as you put parchment paper between each pancake. This prevents them from sticking together.

You can store your frozen pancakes for up to 6 months.

Whenever you’re ready to eat them, simply take out of the freezer and thaw them overnight in the fridge. You can reheat them in the microwave or the oven. Although it’s better to do it in the oven.

If you’re in a hurry you can warm them up in the microwave for about 1 to 1-1/2 minutes.

If you’re using a conventional oven, simply place the frozen pancakes on a cookie sheet (single layer) and cover with foil. Bake at 350 degrees F for about 10 minutes. 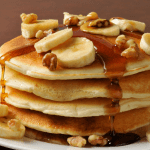 1. In a large mixing bowl, whisk the egg, egg whites, maple syrup, olive oil, and vanilla extract until smooth. Pour in the coconut milk and whisk to combine.

2. Add the sifted coconut flour, baking powder, and a small pinch of salt. Gently fold in the dry ingredients without overworking the batter.

3. Melt about a teaspoon of coconut oil in a large, hot non-stick skillet or griddle and pour 2-3 tablespoons of batter per pancake. Cook until the pancakes are set and the edges turn a deeper golden color, around 1-2 minutes.

4. Flip and cook the remaining side another 1-2 minutes, or until golden brown. Remove from heat and repeat this process with the remaining batter.

5. To serve, stack several pancakes and top with sliced banana, raspberries, and drizzle with real maple syrup, if desired. Enjoy!

* Sift the flour before adding it to the mixing bowl.

* Coconut flour pancakes take a little bit longer than traditional pancakes. But it's important to cook them on medium-low to medium heat. Don't be tempted to turn up the heat or you can easily end up burning them.

* Keep the pancake size small. About 2 to 3 inches in diameter. This makes them much easier to flip.

Thanks for your feedback!