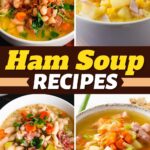 Cold season is well underway, and if you’re anything like me, you’ll want to make all of these scrumptious ham soup recipes right away.

I mean, is there a better way to warm up than a big bowl of protein-packed soup with veggies?

Plus, ham is a high-quality protein that’s easily prepared for any palate. And a little goes a long way, making it super affordable to boot.

These 15 ham soup recipes are filling and so tasty, I bet even the kids will ask for seconds!

The great thing about Indian soups is that they usually include lentils for a boost of protein and fiber. They’re also pretty thick and filling, which I love.

But when you want something without the spice that’s a little less heavy, this lentil and ham recipe is the next best thing.

It’s perfect for a cold fall or winter night, and it freezes incredibly well if you make a large batch.

I recommend using a classic mirepoix (onions, celery, and carrots) along with tomatoes for something more colorful. However, you can easily change the veggies to your liking.

If you have a ham bone, adding it to the broth as this soup cooks will really elevate the flavor.

Holy smoky ham, this recipe is heavenly. If you’re a fan of black bean soup, I can’t recommend this enough.

And I promise it’s worth the prep time.

Sure, you could replace the bean cooking process with canned, but the result of tender home-cooked black beans seasoned with garlic and cumin is second to none.

This soup is soul-warming, hearty, and insanely flavorful, thanks to the ham bone in the broth.

Did you grow up eating split pea soup, too? I think it’s one of those love-it or hate-it kind of meals, though I’m firmly in the former camp!

When it’s done right – like in this recipe – it’s more than just a bowl of mushy peas with ham bits.

This recipe is superb the day of cooking and even better after freezing and warming up on the coldest winter nights.

I was so excited to try this recipe I ran straight to the store to get the ingredients. It’s on the stove as I type, and it smells fantastic!

Forget the overly acidic tomato soup you think you know; this is the one to make when you need a warming lunch or light dinner.

Yes, it has a long list of ingredients, but that’s where the robust flavors come from.

Serve with a dollop of creme fraiche and a crunchy slice of toasted baguette.

Creamy ham and potato soup is one of my favorites to throw together on a busy, chilly night.

Warm your family up with nothing more than mirepoix, potatoes, ham, bouillon, and milk.

For gluten-free readers, replace the all-purpose flour with a gluten-free mix, or mix cornstarch and water to thicken.

Is it just me, or are lima beans better as an adult? I won’t age myself, but I swear they didn’t taste this delicious years ago!

Also known as butter bean and ham soup, this is one of the easiest and healthiest soups on this list.

After sautéeing the celery and onions, simply add in a ham bone, lima beans, and broth, then boil away!

The suggestion of serving with cornbread and hot sauce comes highly recommended.

Like a good stew or chili, soup often needs time to simmer. That allows the ingredients to become tender and for the flavors to marry.

Better still, when you use a slow cooker, you can set it going and forget about it until dinner.

This ham recipe is unlike some of the others as it has quite a kick of chili powder and jalapeños.

Top it with sour cream, cheddar, or cotija for an authentic Mexican treat.

Though all of these soups would be elevated with a bone or hock, this recipe is specifically designed to be made with a ham bone.

It’s not just there for flavor; you’ll want the marrow and extra meat too.

White beans, potatoes, corn, onion, and carrots are all piled together to work in harmony with the ham, making this filling and irresistible.

Though it has another name, this is classic ham and bean soup at its core.

You won’t need much to toss this recipe together; simply cook your navy beans, then stir in sautéed onion, butter, and ham.

This is a sturdy soup that doesn’t need a side dish, but it pairs well with toasted bread or topped with crunchy croutons.

I like soup with texture, so I usually skip the puree step. Trust me, the contrast of the creamy, cheesy broth with the tender potatoes is to die for.

That said, it does make one heavenly bowl of creamy soup, too.

If you tried any of these Weight Watcher’s soups, you’ll know that “diet” food is anything but boring.

Although this recipe isn’t on the official list, it definitely qualifies as a healthy dinner. Loaded with veggies, hatch chiles, beans, and ham, you’ll be stuffed after one bowl.

Thanks to the grain blend, this is super satisfying. But feel free to play around if you don’t like farro or rice.

I think quinoa would make an excellent substitution.

This low-carb, paleo-approved soup tastes way too indulgent to be healthy. But I promise, it is!

You’ll use cauliflower instead of potatoes to cut back on the carbs, and the added liquid smoke is a superb touch.

You could even make this into a Whole30 soup recipe if you swap the butter for coconut oil or bacon fat.

13. Old-fashioned Ham and Cabbage with Potatoes

You don’t have to be Irish to crave this ham, cabbage, and potato soup. It’s comforting, filling, and pretty inexpensive to make.

You will love the earthy flavor, especially after letting this soup chill together overnight.

Here’s another impossibly creamy soup that calls for a favorite vegan ingredient; cauliflower.

But that’s where the vegan-friendly ingredients end, I’m afraid because this dish is loaded with ham, cream, and butter.

I enjoy having more rustic chunks of ham torn from the bone rather than cubed ham, so I always use a hock. But you can make that choice depending on what you prefer and what’s available to you.

This is delicious served with a generous helping of cheddar cheese, chives, and fried ham or bacon!

This recipe is one hearty ham soup you will come back to time and time again.

With just a few pre-cooked ingredients, it’s not only delicious but easy to make on a busy weeknight.

The grainy wild rice makes an excellent contrast to the creamy base of this soup, and I just love the added color too.

If you prefer more stock in your soup, I recommend cooking the rice ahead of time, so it doesn’t soak it all up.

15 Ham Soups for a Rainy Day

Whether you have holiday leftovers or a craving for something meaty, these ham soup recipes are simple, delicious, and sure to hit the spot.