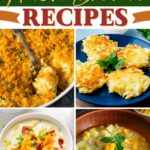 Of all the frozen hash brown recipes available online and in cookbooks, the only one that ever seems to come to mind for most people is cheesy hash brown casserole.

That’s why I’ve pulled together this list of 20 frozen hash brown recipes.

The traditional hash brown casserole is on it, of course, but there are also several other options for you to test out and enjoy.

So if you’re in the mood for potatoes, you’ve come to the right place.

You can whip up this tasty, filling casserole with fewer than 10 ingredients: hash browns, taco seasoning mix, chorizo, eggs, Mexican cheese, milk, salsa, and salt and pepper to taste.

It takes a little less than an hour from start to finish, but it’s one of those great meals you can make beforehand and heat up the following day if you’re in a bit of a rush.

As I mentioned, people always think about casseroles when they imagine frozen hash brown recipes, but you can actually use them to make potato soup, as well!

It’s creamy, has a light but savory flavor, and takes only 10 minutes to prepare. After that, drop it in the slow cooker and go about your day.

It’s a simple, straightforward meal that you could make just as easily over an open fire.

You’ll also add salt and pepper and need some cooking spray for baking.

They’re a quick, mess-free way to enjoy a balanced breakfast in the mornings.

Breakfast casseroles are just more manageable when you make them with Bisquick, and this one is simplicity itself.

It’s almost like a breakfast quiche, but the texture is somewhat different.

If you like to find a bit of spice in your dishes, give this pepper jack potato casserole a try.

With its cheesy bacon and cracker crust, all the different herbs and spices, and its creamy, buttery center, there’s a lot about it to love.

They’re living proof that just because two things are the “same,” that doesn’t mean they’re alike.

This one features a creamy center and a crunchy topping, plenty of cheese and butter, and fresh parsley for color and flavor.

It makes the perfect side dish for any occasion.

This seven-ingredient hash brown casserole is a more traditional version of the dish.

If you’ve ever enjoyed it at your local Cracker Barrel, then you’ll also like this copycat recipe.

And if you’ve not had the pleasure of trying it at Cracker Barrel, you should definitely give it a try.

Here’s another thick and hearty option if you’re a fan of soups, stews, and chowders.

It takes only 15 minutes to prepare, but you’ll need to let it simmer in the Crockpot for about 8 hours.

It’s a relatively mild-flavored chowder, especially if you leave out the sausage (which I sometimes do), but you can load it down with green onions, cheese, chives, bacon, and more.

It’s one of those meals that’s easily customizable to suit your tastes.

With only four ingredients and four steps to the recipe, these chili cheese browns are insanely simple to make and shouldn’t require more than 20 minutes of your time.

They’re messy and indulgent enough that you couldn’t eat them every day, but if you’re looking for a flavorful, greasy appetizer for a special occasion, give these a try.

Hash browns on pizza might seem like a weird combination, but it makes more sense when you’re talking about breakfast pizza, which is exactly what this is.

Plus, the hash browns aren’t actually on the pizza. Instead, you’ll use them to make the crust.

As for the toppings, you can go as simple or as elaborate as you like.

The recipe calls for eggs, ham, cheddar cheese, pepper, and onions, but you can add bacon, sausage, more veggies, or a second type of cheese if you prefer.

Traditional huevos rancheros is a typical breakfast or brunch option in many Latinx homes and restaurants. Usually, you’ll serve them with warm tortillas.

These breakfast bowls leave out the tortillas but add a lot of other goodies for one insanely filling breakfast.

You’ll still have the traditional beans and pico de gallo, but there’s more.

You’ll also add a cup of hash browns, several slices of bacon (or turkey bacon), a sliced avocado, and eggs.

This isn’t a light breakfast, as it’s meant to keep you full all day long.

There are a lot of casserole options on this list, but they’re all different and all delicious, so I wanted to share them.

This one is also a breeze to make, requiring nothing more than hash browns, cheese, ham, green onions, eggs, evaporated milk, salt, and black pepper.

What it lacks in complexity, it makes up for in taste.

It’s cheesy, meaty, and the perfect comfort breakfast on a lazy morning when you just can’t find the energy to get going.

I’m sure everyone is familiar with hash browns, but you’re missing out if you aren’t cooking them in your air fryer.

It’s quick, easy, and gives you the most crunchy, flavorful taters imaginable.

Is there ever a wrong time to enjoy Mexican food? (The answer is no!) So why not have taco hash brown waffles for breakfast?

They’re crispy, beefy, cheesy, and just a bit spicy. However, they aren’t so spicy that you can’t enjoy them.

Plus, they’re naturally gluten-free, and you can have them ready in 30 minutes.

If you love the idea of all these breakfast casseroles but need a vegan option, this recipe is the one for you.

Of course, those last three things are of the vegan variety.

Still, there’s so much going on in that casserole dish that it’s hard to distinguish between the vegan and non-vegan versions.

This one, on the other hand, is full of meat – both chicken and bacon! It’s also incredibly cheesy and decadent.

The green onions add a bright burst of earthiness, and the hash browns and bacon make it crunchy as well as gooey. It’s an excellent combination.

It tastes similar, but this one is zestier and has a tiny bit more heat.

These are cheesy, garlicky, and unbelievably delicious. Best of all, you can serve them with practically anything.

Whether you’re looking for a hash brown-based dish for breakfast, brunch, or lunch,

Delmonico potatoes are it! Trust me, everyone – young or old – will love them.

Of course, I saved the spiciest dish for last. This corned beef and horseradish hash isn’t for the faint at heart, but if you can get past the heat, it’s incredible.

It’s easy to make and takes just over half an hour. It features plenty of hearty chunks and even more flavor.

If you don’t enjoy hot meals, you could always leave out the horseradish sauce.

But really, what’s the fun in that?! Then it’s just regular old potato hash.

These frozen hash brown recipes go well beyond hash brown casserole! From soup to breakfast cups to waffles, hash browns are much more versatile than you think.