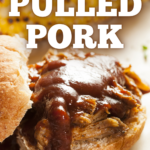 It may sound crazy, but this recipe for Dr. Pepper pulled pork might just be my favorite way to make pork.

Not only does it come out tender and juicy, it’s packed with flavor that you just don’t get anywhere else.

Cooking meat in soda isn’t anything new, and you could use cola if you prefer. But using Dr. Pepper adds fruity, somewhat spiced notes to the pork that works so well with the BBQ sauce.

And the best part? It cooks in a slow cooker for a super easy, hands-off feast!

Pulled pork can technically be made with most pork cuts, but the shoulder is by far the best.

It has marbling of fat throughout for a super juicy and tender end result.

I’ve used pork loin before, but it doesn’t quite soften in the same way and lacks that melt-in-your-mouth texture.

Incorporating Dr. Pepper into the mix not only adds a ton of flavor, but it also works to tenderize the meat even further.

Starting with a layer of onion that will soften up as the meat cooks, all you have to do is throw everything into the pot.

The combination of mustard seeds, cayenne pepper, and Worcestershire Sauce complements the sweet soda and tang from the BBQ sauce.

Once you have everything mixed, just set the heat to high and try to be patient for the next four to five hours.

After that time, you should be able to shred the pork with little to no effort.

Another hour in the pot will give all those amazing juices time to seep in for a final pulled pork that you’ll be fighting over.

The ingredients used here are tried and true. Follow them to the letter for a perfect piece or pork.

But don’t be afraid to experiment! Once you see how easy this is to cook, you’ll be itching to try different variations once a week!

Our recipe for Texas Pulled Pork is still my go-to!

For this recipe, you will need:

This recipe is truly a simple dish. Once you have the ingredients, it’s as easy as putting it in the slow cooker and waiting.

Of course, there are a few things you can do to take it to the next level!

For more tips and some fantastic options for how to use any leftovers, check out our Slow Cooker Texas Pulled Pork.

Why Cook the Meat and Soda Together

Adding dark soda to your pot is a wonderful way to infuse extra flavor into the meat.

Where Coca-Cola has caramel notes and Dr. Pepper can be somewhat spicy, root beer can add vanilla and even anise to the dish.

You won’t be able to taste it and know it’s Dr. Pepper, per se. But you’ll definitely notice new and exciting flavors.

Not only that, but adding the acidic juice will make sure your meat is juicy and perfectly soft after cooking.

How to Shred Pulled Pork

Given how popular Marvel and pulled pork is in my house, it will come as no surprise to find out I have not one, but two sets of meat shredder claws.

They are more than worth the investment and make you feel like the Wolverine slicing through butter.

If you haven’t bought these yet, once your pork reaches that golden temperature, you can take it from the pot onto a board and shred with two forks.

I like to hold one fork steady and gently pull with the other. This way, I get some pieces that are a little bigger along with the shreds.

20 Foods That Start With E

20 Foods That Start With V

I'm Kim. I love running, cooking, and curling up with a good book! Here you'll find simple and delicious recipes that you can make in 30 minutes or less.