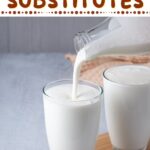 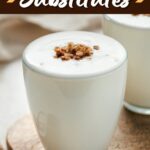 You can’t make buttermilk biscuits without buttermilk, or can you? This list of buttermilk substitutes says you can.

Buttermilk is useful in all sorts of things.

It works wonders in waffles, cakes, and pancakes. You can add it to salad dressings, coleslaw, or cornbread.

Heck, you can even use it to make fried chicken!

Of course, you can’t use it if you don’t have it. That’s where these buttermilk substitutes come in handy.

But first, let’s take a look at what buttermilk actually is.

Today’s buttermilk is a bit different from what it used to be. Today, food scientists intentionally make buttermilk.

They start with regular white milk and add bacterial cultures to it.

That turns it into buttermilk, which is thick, yogurt-like milk with a slightly fermented taste.

Originally, though, it was just whatever was left of milk after churning butter.

Even though today’s buttermilk is different, you still use it the same way.

That might mean making any of those things I mentioned above.

Unfortunately, not everyone enjoys drinking it, so they don’t always have it on hand. Here are some options to replace it just in case.

As I mentioned above, food scientists add bacteria cultures to milk to ferment it.

However, it’s unlikely that you have any of those just lying around the house.

So how can you ferment milk and turn it into buttermilk?

Add a tablespoon of lemon juice to a measuring cup. Then, fill the rest of the cup with milk.

Once it reaches the one-cup mark, you should be ready to make buttermilk.

You simply stir the mixture and leave it sitting out until it curdles. You’ll notice that it gets thick and takes on an odd texture.

Once that happens, the “buttermilk” is ready.

Substitute that cup-for-cup in any recipe that requires buttermilk.

Using milk and vinegar is just as easy as using milk and lemon juice. In fact, the steps are precisely the same.

Add one tablespoon of distilled white vinegar to a cup of milk. Stir the mixture and let it sit unrefrigerated for a bit. (Typically, 10 minutes will suffice.)

You’ll notice the same changes as noted above. Then, you can substitute it at a one-to-one ratio for buttermilk in any recipe you like.

These days, everything is expensive. And if you don’t drink buttermilk, buying it for cooking isn’t always the best option.

After all, it could easily go bad before you use it all.

Who can afford to waste food like that? Not me, that’s for sure! That’s why I often buy buttermilk powder instead.

It’ll give you the same great flavor of buttermilk in your recipes.

However, it’s also shelf-stable and keeps for much longer than buttermilk. It’s not hard to use, either.

Simply mix it with water at a four-part (water) to one-part (powder) ratio.

Then, you can use it in any recipe that calls for buttermilk. (Not just baked goods, either!)

Some people I know even drink the mixture!

Keep a can on hand even if you don’t like it as much as real buttermilk. It lasts forever, and you never know when you’ll need it in a pinch.

After all, most of us don’t keep buttermilk in our refrigerators 24/7.

For most recipes, you can usually substitute plain yogurt for buttermilk.

However, the consistency of whatever you’re making may not be exactly the same.

Yogurt is somewhat thicker than buttermilk. In baking recipes, it won’t be that noticeable.

However, you’ll notice the difference if you’re making salad dressing or slaw.

I usually do 3/4 cup of yogurt to 1/4 cup of milk. You may want to experiment with that ratio a little first.

You might find that it makes it too watery for your tastes.

Whisk the mixture together rather than stirring. That’ll ensure the consistency is more uniform throughout.

Using sour cream is like using yogurt. You whisk 3/4 cup of sour cream with a 1/4 cup of water or milk. (Give or take a dash or two of liquid.)

However, it’s important to note that sour cream has more fat than buttermilk. Don’t be surprised if your food tastes a little different because of that.

It might be heavier, slightly more decadent. This one is probably my favorite substitute for cold, savory foods. (Salad dressing, slaw, etc.)

It gives them a phenomenal taste.

If you don’t want to make a buttermilk substitute, you can always buy one.

Kefir is like buttermilk’s lesser-known, more-expensive cousin. It’s just as fermented, just as thick, and tastes pretty much the same.

There’s not much difference between the two, to be honest.

If you want something different – or your store is out of buttermilk, try kefir instead. The ratio is an even swap.

However much buttermilk a recipe calls for, use that much kefir instead.

What if you need a dairy-free option for buttermilk? What can you do then? After all, buttermilk is milk in the beginning!

Fortunately, you can make a reasonably good substitute with soy or almond milk.

Avoid coconut milk at all costs, though. That’s one mixture that will not turn out right.

You treat this mixture just like you would the milk and lemon juice mixture above.

Fill a measuring cup with a tablespoon of lemon juice or white vinegar.

Then, fill the rest of the one-cup measuring cup with soy or almond milk. Stir, let it sit, and then substitute at a one-to-one ratio.

The taste isn’t exactly the same, but it’s close enough for baking.

I separated cashew milk from the soy/almond replacement above for one simple reason. It doesn’t do as well with lemon juice.

I’m not sure why that is, but it’s true. At least for me.

Whenever I’ve added lemon juice to cashew milk, it doesn’t take on the right texture for buttermilk.

However, it works perfectly with vinegar. Add a tablespoon of white vinegar to a scant cup of cashew milk.

Be sure you’re using unsweetened cashew milk, though.

Then, you’ll follow the same steps as the others. Stir, set, and substitute. Once it’s ready, you can swap it out at a cup-for-cup ratio.

Substituting a tofu mixture for buttermilk isn’t as simple as other options on the list. It takes a little more time and effort but still isn’t difficult.

First, make sure you start with silken tofu, not traditional tofu. You could potentially use regular tofu in a pinch.

However, it’s too thick to make an optimal replacement.

Add silken tofu, a pinch of salt, water, and lemon juice to a blender. (White vinegar works for lemon juice, as well.)

The exact amount of the ingredients is as follows:

Blend the mixture until you have a smooth consistency. Then, let it sit at room temperature for 10 minutes.

It takes some time, but it’s worth it in the end.

Of course, you may be wondering why you’d want to go to all that trouble.

That’s an easy one, too. It’s one of the best vegan buttermilk substitutes for baking. Period.

It may not work as well for slaw or salad dressings. For baked goods, though, it’s excellent.

It may even give you lighter and more moist baked goods than real buttermilk.

Alright, this last one is the strangest. However, it’s also the easiest. You don’t have to add anything, stir anything, or blend anything.

Simply use applesauce instead of buttermilk.

It gives them the same light, moist texture and an incredible taste. You can even use it at a one-to-one ratio, so there are no tricky conversions.

Just be sure you’re using plain old applesauce. (No sugar added is best.)

10 Buttermilk Substitutes (+ Best Replacements to Use)

Try these buttermilk substitutes when you want a good alternative! From milk combinations to applesauce, these replacements are almost just as good.