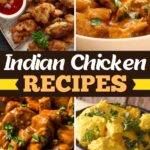 Dinner doesn’t get much more exciting than these bright and fresh Indian chicken recipes!

I don’t know about you, but I’ve had enough roasted chicken and pasta for one year. It’s time for something different.

From your standard korma and butter chicken curries to smokey tandoori meals and tender kebabs, you’ll have a hard time picking just one thing.

Though some recipes require particular spices, most can be substituted to suit your pantry and your palette.

I think chicken tikka masala is one of the most well-loved and well-known curries around. It’s bright, bursting with flavor, and just what you need for a delicious dinner.

Though it’s full of yummy spices, it’s not spicy. However, you could make it warmer if you add extra chili powder.

It’s also easy to make dairy-free. Just swap out the heavy cream for coconut cream, and you’re good to go.

I love curry and often tell myself that I’ll order something new whenever we go to an Indian restaurant.

But I’m always drawn in by this creamy, sweet, and mild coconut and ginger sauce.

The trick to adding coconut milk is to make sure it’s at room temperature. If it’s cold, it might split.

I love using the slow cooker because it keeps the stovetop clean and allows the flavors time to marry. Plus, it usually gives a thicker sauce to boot.

Though this might not be the most vibrant-looking dish, Mughlai chicken is packed with flavor.

It includes a brown onion gravy and soaked cashew, making it rich and creamy. The heavy cream goes in right at the end, but it shouldn’t affect the thickness.

Also known as nadan chicken ularthiyathu, this is probably one Indian dish you’re not as familiar with.

Unlike the recipes above in which the chicken is cooked in sauce, this version is dry-cooked.

That means you’ll cook the chicken until the excess water seeps out before lowering the heat and cooking until tender.

If korma and butter chicken are too mild for you, then you’ll need to try this incredible spicy chicken recipe.

It gets most of the heat from the chilis and peppercorns, so you can alter the recipe if you don’t want it as hot.

Tandoori chicken is an authentic meal made by roasting chicken in a tandoor, a cylindrical clay oven.

You’ll need skinless legs and thighs marinated in yogurt and spices to ensure it’s as tender and flavorful as possible.

When they’re ready to cook, you’ll cut them to the bone, slicing them about an inch apart over the surface. This helps the marinade permeate and the chicken cook faster.

These are similar to meatballs or mini patties; only they’re full of tasty Indian spices and either chickpeas or dal.

They’re ideal for serving as a simple starter or would be a great addition to any Indian feast. I like them dipped in mango chutney!

As mentioned, a tandoor is a type of oven. So, when you see tandoori recipes, it’s referring to the dry-cooking method rather than the taste.

That said, it’s guaranteed that tandoori chicken will be spiced, tender, and beautifully smoky.

Unlike shish kebabs, which use chunks of meat, seekh kebabs are made using ground meat that’s spiced, seasoned, and molded around a metal skewer.

Since ground chicken is relatively lean, try to look for ways to add extra fat, so it binds together and doesn’t dry out. One easy way to do this is by adding plain yogurt to the mix.

Though nobody really knows how this dish got its name, one thing is clear: it’s insanely good!

Marinated for 24 hours in spiced yogurt, then deep-fried, I could eat a whole platter of this chicken myself.

The real star of the show, though, is the dry rub that you’ll toss the cooked chicken in at the end. It’s so colorful and adds a fantastic depth of flavor.

You’ve likely noticed that most of these recipes call for some form of yogurt marinade. That’s because the lactic acid slowly tenderizes the meat and adds flavor.

This recipe is no different, though it doesn’t have such a long ingredient list.

Instead, once the chicken has been left to marinate, you just need to cook it with onions and ginger. Then, add everything to the pan and let it bubble until the chicken is cooked.

This dish is pretty different from the recipes above. First, it’s not made with tomato or coconut milk. And second, it uses primarily garlic and lemon for the taste.

You’ll cook the chicken right in the marinade until it’s mostly absorbed or evaporated. I then like to finish it in some hot oil for texture.

Biryani is another hugely popular Indian dish, and there are, in fact, at least 10 different types.

It’s pretty spicy but also warm and tender. Unlike some other curries, this one incorporates the rice into the meat and sauce, mixing everything together.

Where the seekh kebab used ground chicken, this is a simple grilled chicken dish that uses sliced, boneless chicken.

Though it takes a little more work, I think these would make an excellent addition to your next BBQ.

Vindaloo is a cult fave in the UK, so much so it was featured in a 1998 FIFA World Cup song. So yeah, they take it pretty seriously.

It’s known to be very spicy. That means if heat isn’t your thing, you might want to skip this one.

I suppose you could technically cut down on the chilis, but that would take away its magic. You’re better off choosing something milder.

We’re smack in the middle of the season when nothing quite beats a hot bowl of soup.

This year, in lieu of bland chicken and veggie soup, why not try this lightly spiced chicken curry soup instead?

That touch of heat should warm you up in no time!

How incredible does that platter of crispy chicken look? You can practically hear it crackling, and you’ll just know it’s spicy.

Deep frying is a must for this, but since the meat is only lightly coated in corn starch, it’s just the right amount of crispy coating.

My favorite thing about this recipe is how the chicken falls off the bone. It’s ridiculously tender, brimming with spice, and best served with warm naan.

It’s best cooked in a wok (Kadai is a wok in Hindi), but any deep pan with a heavy bottom will do the trick.

As you can see, this chicken curry uses a lot of spinach. It’s cooked with the chicken in a creamy sauce made using onion, tomato, and cashews.

It’s best to use fresh spinach for this and to chop it before cooking. Frozen will add too much excess moisture to the mix, which will leave the curry watery.

If you’ve ever tried this dish, you’ll know it’s made up of layered, spiced chicken that’s cooked on a spit. As it’s cut, you’ll get perfect bites of crispy and juicy meat.

I think this is best served in a naan with pickled red onions, a little hummus, and lots of tomatoes.

Luckily, you can cook this in a hot pan and still get the same tasty results.

This classic Indian street food is usually made with veggies. It’s a type of fried fritter that’s crazy-delicious and perfect alongside everything from korma to vindaloo.

Since the chicken is in chunks, these have less batter. So, though they’re just as tasty, I think they might be a little healthier.

As far as chicken and lentil curries go, I think this is my favorite.

Lentils are cheap, filling, and a great way to bulk this dish out. They’re also jam-packed with protein, high in fiber, and, better still, they’re low in fat.

Here’s another lovely spinach curry, but unlike the recipe above, this dish should also include other deep and leafy greens.

When you look at the recipe, you’ll see that you need a whopping 10 cups of spinach, but don’t worry! It wilts down to next to nothing in a matter of minutes.

If you’re new to Indian food and don’t know where to start, this simple chicken curry is just what you’ll need.

There are no hard-to-find spices, and most of the ingredients are pantry staples.

If you want this creamier, go ahead and add some room-temperature coconut milk at the end.