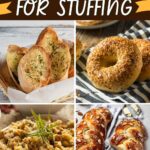 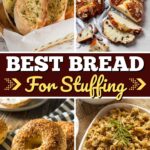 When making a holiday feast from scratch, you might wonder what the best bread for stuffing is.

So from Challah to bagels, I’ve found eight terrific options.

Stuffing and turkey are a match made in heaven.

But did you know that stuffing is more than just a side dish? It’s also used to ensure your bird stays impossibly moist.

Without stuffing, all those juices would bleed out into the pan. So, selecting the best bread is just as important as the seasonings.

What’s the best bread for stuffing? Let’s find out.

In America, stuffing is a mixture of bread and seasonings stuffed inside the cavity of a turkey or chicken. Also known as ‘dressing,’ it prevents the meat from drying by soaking up and retaining juices. In other countries, stuffing can contain breadcrumbs, rice, sausage, vegetables, and more.

It also makes a killer side dish that bakes in tandem with your poultry.

So, when you pull the bird out of the oven, you’ll have perfectly moist meat and a rich and flavorful side dish. Win-win!

While turkey is stuffing’s biggest claim to fame, it can be used in many other recipes, like rolled in beef tenderloin.

And other countries have their own versions too! I happen to adore the Brit’s sage and onion stuffing.

They make it, roll it into balls, and bake it until crisp on the edges.

So, what makes a perfect stuffing?

While the seasoning used plays a big part, did you know that you can also transform the flavor and texture using different types of bread?

A good old-fashioned white loaf works in a pinch, but the next time you whip up a batch of stuffing, play around with it and see which you prefer.

Different styles of bread can transform bland old stuffing into something more decadent, flavorful, and elevated.

So, check out these clever bread stuffing ideas to make your homemade stuffing the talk of the Thanksgiving day table:

Challah is very similar to white sandwich bread, with one major exception: unlike traditional white bread, Challah infuses eggs into the dough.

Known as an ‘enriched dough,’ this guarantees a richer flavor. Plus, it gives you a lovely airy crumb.

When used in stuffing, it behaves similarly to white bread but is a lot more flavorful.

Challah is one of the best options for bright, fluffy, and flavorful stuffing. But it is more expensive than white sandwich bread.

When in doubt, it’s white sandwich bread to the rescue!

There’s a reason this is one of the most-used stuffing ingredients: it has a neutral flavor profile, which allows the meat juices and seasoning to shine.

It acts as a blank canvas for those wonderful seasonings. And it’s also incredibly affordable.

When baking for a large group, a cheap white sandwich bread goes a long way.

Believe it or not, bagels have the perfect taste and texture to soak up meat juices. They’re dense, tight, and relatively mild in flavor.

Some people think they’re too dense, which makes the stuffing quite heavy. But I actually like that.

That said, if you want something fluffy, you’ll want to skip this one.

If you love the unique flavors of English muffins, it’s a great stuffing option.

English muffins create a more dense stuffing that doesn’t absorb the flavors quite as well as traditional white bread.

But it’s a fun and flavorful experiment that lends unique flavors to your homemade stuffing.

Again, it won’t be super light. But I still think it’s a good option.

Martin’s Stuffing Cubes are the next best thing if you want to save time drying out your bread but don’t want to skimp on flavor.

This bread is an excellent option because it uses potato bread, which is light, wonderful, fluffy, and flavorful.

When used in stuffing, it adds even more savory notes.

Plus, it’s pre-seasoned with sausage, which plays so well with the slight sweetness of potato bread.

If you are short on time (or just forgot to dry out your bread), Martin’s Stuffing Cubes are a fantastic time-saving option!

Baguettes are an experimental adventure in stuffing.

The open structure doesn’t absorb the broth in the same way as traditional white bread, but all isn’t lost.

Baguettes create a stuffing that’s a little on the dry side but absolutely bursting with rich flavors.

It’s not your traditional stuffing recipe, but it’s a fabulous option if you want something different.

Some cooks love using baguettes, while others don’t care for the consistency. However, I think you’ll like it if you give it a try.

Sourdough bread is rich, sour, and bursting with tangy flavors.

So, I only recommend using sourdough boules if you, and your family, absolutely love sourdough.

Sourdough has a distinctive open structure, which means it won’t absorb juices and flavors as well as basic bread.

And yes, the stuffing will taste slightly sour.

But it makes a nice change if you have a lot of sweet items on the table, like glazed carrots and sweet potato casserole.

French bread is a little like baguettes, only the crust is much softer, and it’s generally wider.

It’s another white loaf with a very open texture, so it won’t absorb the juices as well as white bread.

However, you can’t beat that flavor of savory French bread!

You’ll want to use a lot so it can soak up as much flavor as possible.

When making a holiday feast from scratch, you might wonder what the best bread for stuffing is. So from Challah to bagels, I’ve found eight terrific options. 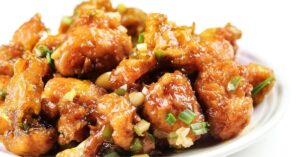